Computer not starting, fan just blows for a few seconds

Since there aren't much reading about problems other than heat issues I have something new and flashy for you all technicians to bite on to.

I just replaced the screen, which was cracked, to a new one and noticed that the bracket to the top left screw on the fan had been ripped off and the exhaust for the fan had been pressed down so it couldn't spin freely. I restored the thin aluminium, it's very fragile, and tried to fire it up but as it seems the fan just spins for a few seconds then shuts down. The computer doesn't start up or anything.

My question is if that bracket could have an impact on the logic board which makes the startup fail? Does MacBook Air need to have a fan working before it starts up? My guess would be that if the fan isn't working, if it burned out when it was pressed, then the computer would shutdown before overheating would be a fact.

Is there any way of attaching that bracket so it can function again?

By the way I had it checked by a Apple Authorized Service Provider and their solution was to replace the logic board and fan. I'm not so sure about that though.

Please have a look at the picture provided and please only answer if you have serious knowledge about logic card components or have had this problem. 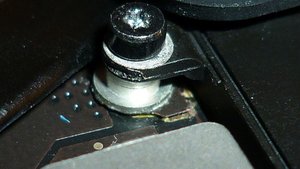 I have now replaced the logic card but the problem remains the same. Any idea would be highly appreciated!

Solution: Display-cable was inserted upside down.