I would really appreciate help identifying the part in the attached picture (Square component with "4.7 UH 1015BE" inscribed on it). 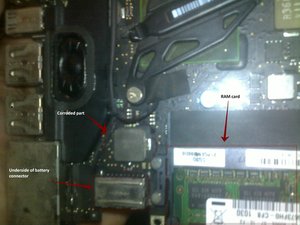 Reasons and history below:

Symptoms: Computer will not power on. When Magsafe charger plugged in, light on L shaped connector is initially green, then shortly starts blinking between orange and green (still no power to notebook).

Suspected issue: Power circuit issue caused either by corrosion, a voltage fluctuation, or both combined.

Description:Recently the Macbook Pro of a friend suddenly shut off, and refused to start up again. The Apple store quoted an financially un-viable replacement of the logic board as the only solution, as it would be more logical to purchase a new mac. However they did indicate that it would be a power related issue (most likely a surge in voltage I presume).

I have successfully disassembled the mag safe charger (which does not seem to have any issue from an initial inspection) and then went on to remove the DC-in board and the logic board. The only issue I would spot was some corrosion on the component shown in the picture (to surface of the logic board). I want to find out the component, in order to determine whether this is the issue. 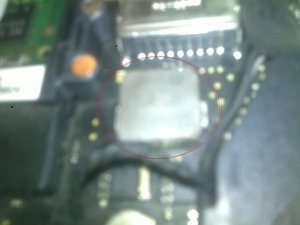 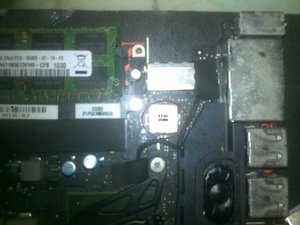 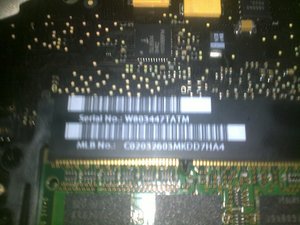 What are the last three digits of the serial number? A slightly clearer and more focus image might help as well. Try to take a pic with less of an angle :-)

Oshan Fernando, what are the last three digits of your serial number and what processor speed do you have? This will help me to look at the right motherboard schematic

So inductor it is then. I'll try to figure out whether this is the issue. Seems to make sense,because as far as I can see, the battery, the power adapter and the DC-in circuit seem to be functioning fine, in which case the blinking magsafe light can only mean a logic board, power related fault from what I can understand.

Oldturky, I know you can only give me an opinion, but on what I said so far, does a busted inductor sound about right?? Because its definitely corroded, and that's the only visible damage. Also, as soon as the charger is plugged in it remains green for a minute or so, then starts blinking. Again, I would really appreciate just an opinion.

Oshan Ferando, with the help of the pictures (sort off;) and the logic board schematic, the part comes back as L7030 4.7UH-9.5A IHLP4040DZ-SM It is available at places like this and yes Mouser too. Hope this helps, good luck 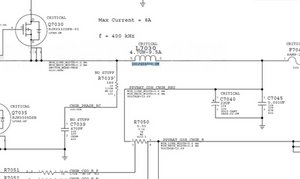 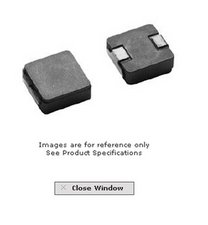 This is fuse F7040 check it as well. It is directly connected to the same circuit 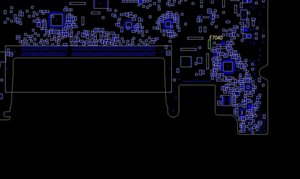 Thank you for accepting my answer. Good luck to you.

Call these guys : Mouser Electronics. They prob know. A search on there site pulled up This

Thanks for that, but first I want to identify the part it make sure that is what is creating the issue. But really appreciate the link for when and if I need to get a part!:)