So I can fix my laptop for cheaper.

Yes, it will work. However, you will have an issue w/ the right-side speaker assembly. I'll try to explain. The speaker assemblies for both are L-shaped, but they have a "bump" at the top (logic board end) which the logic board has a matching cut-out for. The 2010 is a rounded bump/cut-out, while the 2011 is squared off (see attached image, 2011 board installed, 2010 board laying on battery).

Bottom line, I think you could probably make it work by "massaging" the speaker assembly, if you want to. Keep in mind you'll lose Thunderbolt by going back to 2010, as well as keyboard backlighting. Also, you'll likely need the 2010 keyboard/trackpad cable, as the connector is in a different spot on the 2011. The 2011 cable is more than long enough, but I think you'll be stressing it by trying to bend it and change the 90-degree folds to realign it. 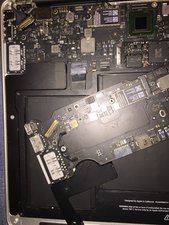