I am using a Macbook Pro 2.5 GHz with default 4GB RAM, along with that I have Parallels desktop install to support me with my Windows related work.

Problem: When I use Windows (with Parallels), my system heats up quickly, battery utilization increases forcing me to have to frequently plug in for charging and sometimes even crashes.

Yes, and No, RAM did played a role here!

To troubleshoot I uninstalled all the heavy Windows applications on my Mac and monitored the CPU usage and RAM usage. There was a drop but not enough to solve the problem that I was facing running Parallels with Windows.

I can say now, its been more than a year now. My Mac is running absolutely fine. Thank you all for the support.

Parallels, like other virtualization middleware applications, runs an entirely different operating system with its own native applications. This virtualized environment also commands its own memory space, because the virtualized OS doesn't know it's not the boot OS. The memory space for each virtualized OS is set in the Parallels preferences on an OS-by-OS basis. If you've authorized Windows Whatever to use 4GB RAM (for example), that 4GB is not available to the OS X environment until you shut down the Windows environment.

The first thing you should do is check the Parallels preferences for your Windows environment, and see how much RAM you've allocated to it. Depending on whether the Windows installation is 32-bit or 64-bit, you may be limited in the amount of RAM you can allocate to Windows. Photoshop, Lightroom, SQL Server etc. will all draw their RAM out of the Windows pool, rather than the larger pool available to the Mac. In any case, you can't allocate more RAM to Windows than the Mac has installed, and it's a Very Bad Idea to give 100% of your RAM to a virtualized environment, leaving little or nothing for the boot OS.

It sounds like you're running high-horsepower applications in the virtualized environment, which is not an ideal use. You'd get better performance out of an OS X-native version of Photoshop, which would then take RAM as needed like a good OS X application. Alternately, you could install Windows as a dual-boot OS using Apple's Boot Camp utility. Then, when you boot natively into Windows, Photoshop will behave according to standard Windows rules without being limited by Parallels' RAM cap.

But, since this is where you are now, this gives you a justification to do the no-brainer upgrade, and max out your RAM.

RAM is the upgrade that gives the most bang for your buck, especially in laptops. My recommendation to my clients is always to max out any machine with only two slots, rather than upgrade in smaller steps. It's better to get all the benefit of going to 16GB in one jump, rather than upgrade from 4GB to 8GB, find out that it's not enough, then upgrade to 16GB and have to resell/trade in the 8GB.

Once you've gone from the stock 4GB to 16GB, you can then throw a pantload of RAM at your Windows environment (using the Parallels preferences), which will then be available to your Windows applications. You can try upping the Windows allocation until the computer stops grouching at you. My guess is that the practical maximum is 4GB for Windows XP, and 8GB for Vista/Win7/Win8. Even so, that will be a lot more than it has now, and you'll still have a lot more available for your OS X environment.

Having more RAM in use means you'll be doing a lot less swapping to disk, which can really drive the heat up. Photoshop will eat all the hardware you're willing to pay for, so more RAM = better. It might be worth getting a temperature/hardware monitor such as iStat Menus or one of Marcel Bresink's monitoring apps (System Monitor, Hardware Monitor, SystemLoad) to keep track of what's going on while you're messing with this, to track whether the changes you make are getting the desired results.

Another heat-lowering option is to get a faster disk - an SSD, or a hybrid SSHD (standard platter drive with a big solid-state cache). Photoshop uses its own virtual memory/swap disk regime, separate from the ones used by OS X and Windows. The faster the disk hosting that swap space is, the faster the results and the less heat gets generated.

Start with the heat issue then address the RAM. We use Windows in a VM and our systems don't get that hot even when running large CAD files which is just as hard as video or picture editing. Not saying more RAM will be useful here but first diagnose the heat issue.

I don't think RAM is your issue here.

How about doing some deeper diagnostics to work out the heat issue, then figure you if you need more RAM based on the size of your work.

To start with download this app: Temperature Gauge Pro. It will allow you to see what the built-in sensors are telling you. Post a screen shot so we can see when the system is running hot.

Basically, I suspect you may need to do some cleaning internally as the dust has built up preventing your system to cool. But the snapshot will tell us for sure.

@adlerpe - No, I don't disagree, I just like making sure the basics are covered first. 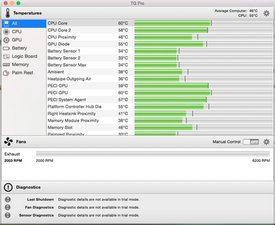 Thank you all for your feedback, I tried TG Pro application trial.

Observation: Normal Macbook temperature was fluctuating between 39 C to 45 C. However as i launch Parallel temperature bump up to 65 when Windows load completed and was nearly 70 C - 75 C when i launched Visual studio and SQL server there was slight increase in temperature and 30 min of runtime , Macbook was very hot with sound of fan which can be heard.

I think you have a process running hard here for some reason within Windows. Using Windows Task Viewer see if you can identify which process. Which version of Visual Studio & SQL are you running? We have quite few people running the Pro version of Visual Studio 2015 with 4GB & 8GB systems without complaining about heat issues. We use it to make custom tools so our development is small stuff.

It's also pretty curious that in spite of how hot the CPU and GPU are running, the exhaust fan is only at 2000 rpm. Perhaps something's goofy with a heat sensor?

Yes, the fan is not cooling the system correctly. Most likely the system needs to be cleaned (dust buildup) and the fan may need replacement. You also likely need more RAM as well as @adlerpe stated. Going to a SSD may also make sense here.

Increasing RAM will avoid both OS's to use the drive for swap space.

If you give e.g. 1GB to OS X and 3GB to Win, OS-X will start swapping, which results in heavy HD activity.

On the other hand it seems - like mentioned before - you are running a heavy CPU consuming app in your VM. I would check that first with Windows task Mgr.