Won't Boot: How to diagnose if Logic board or PSU at fault?

Symptoms: Has suffered no trauma (No shock or water) but suddenly no chime on boot. Screen remains black - no light. The only thing that moves is the DVD drive. After inserting a boot DVD, it 'scratches' for a while before ejecting it (And it would only eject it after I had dislodged the drive from the iMac casing. I guess there was too much resistance in the casing's 'rubber dust curtain' for the DVD to push through). Neither the fans nor HDD spin. Inserting a boot USB memory stick does nothing - It doesn't even light up. Attaching an external FireWire-powered boot drive does spin, but it won't boot.

Attempts to reset the SMC (Remove power cord and hold the power button) and PRAM did nothing.

On removing the screen I can see the 4 diagnostic LEDs numbered right-to-left 501, 502, 503, 504. Only the right-most LED (LED501) lights, and it remains lit as long as the power cord is plugged in. Hitting the power button makes no difference to these lights

I have removed and inspected the power supply unit (PSU) but see nothing suspicious about it. I couldn't see any blown capacitors.

Strangely, I can't find an Apple technical manual anywhere for this Mac so hope someone 'out there' can better advise me.

I suppose the symptoms suggest either the main logic board or PSU are at fault but I prefer to be sure before buying a replacement part.

I am comfortable with testing the the PSU (Dangers understood) or logic board (There seem to be lots of square terminals on it for testing and reseting purposes) but there's no point in trying without a guide.

Can anyone please advise? Refer attached photos for clarification. 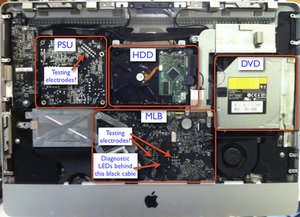 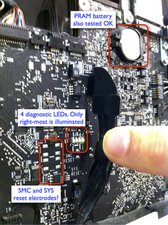 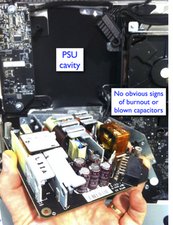 Do you have access to a second Mac? If you do putting your system back together and working see if you can get it to boot up under Target Mode. Then using a FireWire, Ethernet or even a Thunderbolt cable connect your system to the other system are you able to access the systems drive?

Thanks for for the suggestions. I didn't bother of put the screen back on but attempted to boot it with everything else back in place while holding down the T-key while connected to my other Mac via a FireWire cable. Unsurprisingly, since nothing is starting up – no HDD, no fans, no chime – the disk did not appear on the other Mac's Finder This was an attempt to boot into Target Disk Made. I haven't tried Target Display Mode because I don't think I have a thunderbolt cable for it.

Does anyone know where the technician manual for this unit may be found?

Thanks for your answer. I am new to this forum and have 'accepted' your answer ahead of confirming it via installing new parts.

Can you quote from the Apple technician's guide about this or about the test method – using those on-aboard electrodes?

Hi Steven, sorry its such a late post but I am getting exactly the same symptoms although my diagnostic LED's number 1 and 2 are alight (2 comes on when I switch on). The guide I have implies that the PSU is working ok, but nothing more. Is the Ifixit guide correct? I want to repair my iMac but don't want to purchase a replacement PSU or Logic Board without confirmation that the one fitted, or the logic Board fitted, is faulty. Any progress on your repair?

I think I have an answer with reason to back it up. After much searching, I finally found the Apple Technician Guide for this model at the following URL: -

A few other places offered it too, but at a price.

The diagnostic method in the guide suggests the Logic board need be replaced.

Via external links the guide also referenced how to test the board but the links were dead ends which presumably only work for Apple affiliated workshops with the correct credentials.

Thanks for everyone's input.

So now I am looking to buy the logic board.

Sadly its time for a new logic board, and you may also need a power supply as well here. What likely happened here is the system go a good zap (lightning or power surge).

The diagnostic LED that is working is telling us the system is getting some power we just don't know if all of the lines are working.

i Found this one. hope you can get an idea as mayer gave wide range answer.

How to determine what is defect if the system doesn't post?

So I have the exact same model of iMac with the exact same symptoms. No chime, no fans, only HDD and DVD are "working". LED #1 is lit. Looking at a reasonably priced logic board. I was thinking of upgrading it to the 2.7GH one. What would you suggest?

Your choices are limited to one of these: iMac12,1 Series

Thanks for the reply Dan! I am looking into the i5 2.7gh one. Not much difference but a slight upgrade I guess.

Only the right-most LED (LED501) lights, and it remains lit as long as the power cord is plugged in. Hitting the power button makes no difference to these lights, but the Fan seems to be running.