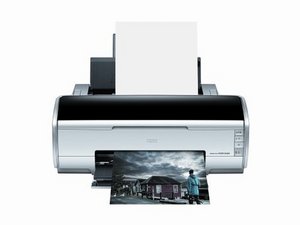 The Epson Stylus Photo R2400 is a color inkjet photo printer made by Epson and marketed towards photography enthusiasts and professionals.

Why is ink leaking out of the bottom of the printer?

I have been using this printer since it was new. I have only used Epson inks. Several times I let it go without using and had to clean. I noticed lines in several prints and cleaned quite a few times but it seems to have taken care of the problem. I had to replace several cartridges. I noticed before that ink was dripped down the front behind where the print comes out. I cleaned the outside and dabbed the ports? after taking all the cartridges out because I saw online that you could do that yourself but I didn't use any cleaner, only wiped with a towel and dabbed the two pads underneath. I was out of cyan and waited a couple of days until it arrived. When I replaced cyan, I cleaned the heads and the nozzles again and thought everything was good. The prints I have been making are fine now. I used a lot of magenta yesterday. This morning there was a quarter size ink spill of what looks like black. Not sure which black. I took out all of the cartridges to see if I could see if any of them were especially messy, and several of the cartridges do not look like they are pierced in the lower hole. I took them out and pressed down hard on them, but they still don't look pierced. It was cyan, light magenta, and light light black. Yet when I checked the ink supply, these are using ink. I never thought about it, except when I replace empty cartridges, they usually have ink smeared down there. I don't know if cleaning the heads and nozzles so many times made it leak, I hope it something like that, because I love my printer!