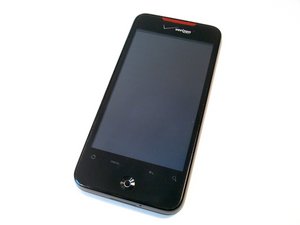 The HTC Droid Incredible is a Verizon-exclusive Android smartphone released in April 2010.

I replaced my display but it still isn't working.

I broke the display screen on the inside of my Incredible. The touch screen is ok, but the display inside was cracked in about three different places.

I ordered a replacement screen with the same part number (60H00291-00P) that is suppose to be an OEM LCD with LED backlight replacement.

My phone was originally an AMOLED display phone. Would that be the problem?

The factory display worked before I took it out, but even it isn't working when I install it on the phone now.

Where did you get the replacement screen from that it caries the same part number? Since your original screen is now not working neither I would be double checking my connections and make sure they are seated right and make a proper connection. I would be looking into some research if it is possible that the difference in display could have shortened out the logic board...just my 2 cents.

I have tried reinstalling it several times, but to no help. The connections appear to be placed flush up into the ports. Do you think that the difference between an AMOLED and a LCD w/LED backlight could be the problem. I had once thought that maybe the power source was too much or not enough, but I don't know a lot about small electronics so I'm kind of in the dark about that one. Thanks for the quick reply btw!

I thought about that to, but if there is a power issue it should only affect the new screen, not the original one. I do not see how it could or even would shorten out any circuits. Something else has gone wacky...we'll get there.

http://www.droidforums.net/forum/android... to double check your work may just be a guide.

If it shortened out the logic board, would it still power on, light up, make the droid sound, etc?

I got the replacement screen from a vendor in California called gadgetFix. It's a Samsung display with the same part number, design, etc.

The phone was previously rooted. I heard that SLCD owners had problems rooting because only about 2 kernels would support the dipslay properly. I done a blind factory restore to the original ROM, kernel, etc. in hopes that it would correct the problem, but it still hasn't as of yet.

I sent the display back to get it replaced because it wouldn't work and looked like it had a crack in the ribbon cable. Do you think that could have been a problem on top of the rest?

Thanks so much for all of your help!

"While the Samsung AMOLED screens sported by the Incredible are beautiful and a key selling feature, HTC is looking at the Sony Super TFT LCD as a replacement while they attempt to catch up with demand. HTC claims that there are “no discernible difference between the displays” and they even expect the change to fly under the radar." so that is where the difference in your display comes from. that would mean that you do have the right display even so it is different. http://www.droidforums.net/forum/android... Make sure that all your connections are seated properly and cables contacts are clean. Good luck