Second generation of iPhone. Model A1241 / 8 or 16 GB capacity / black or white plastic back. Repair is more straightforward than the first iPhone. requires screwdrivers, prying, and suction tools.

Don't know if screen broken or something else...

I dropped my iphone 3s once and no more images appears in the screen.

Some time later I put it to charge and screen light went on, but it shows only some kind of pixel pattern in grey, with vertical white tin lines.

At this stage I cannot tell what is wrong. Screen seems not cracked, since backlight went on but nothing seems physically broken.

The only thing I can do is to press both buttons at the same time and screen goes black like it turn off. When I turn it on again, I get some weird horizontal lines showing on and off for some seconds, then some color randomly placed lines and then a nice white screen for some seconds before the weird horizontal lines dance begins again, like and old tv with a bad antenna.

I will like to have an opinion in this, in order to know what can I do with it since I hate to trow away stuff that can be fixed. 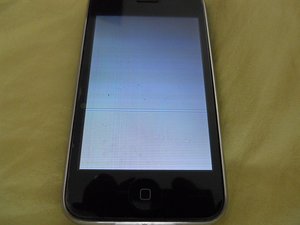 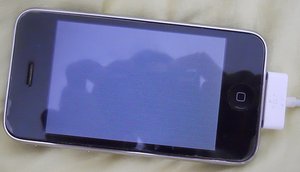 I took off the screen a little bit and the connector #1, and the screen goes black and you must 'turn on' the phone again. that connector is a little devil, who will umplug itself very easily. But with the connector right on place the problem is the one described.

The others connectors, I didn't remove. They seem well placed.

coursparis this "some kind of pixel pattern in grey, with vertical white tin lines" is pretty indicative of a broken display. Here are the guides iPhone 3G Repair needed for the repair. To find a replacement display will not be easy or cheap.

with grey I don't mean lcd liquid, just a degree of very light grey in a perfect pattern. Sometimes is not exactly grey but light blue...

coursparis add an image of what your screen displays with your question. Use this guide Adding images to an existing question for that. It will allow us to see what you see.