Smaller, thinner, quieter model of the Playstation 2 (SCPH-7XXXX) released by Sony in September, 2004.

I can't find the back lid sensor of my ps2

I recently dropped my ps2 and shortly after discovered discs were no longer spinning when I turned the console on. The laser still worked fine moving forwards and backwards when I turned the console on however the motor was still not spinning. After disconnecting the entire disc section of the console, turning the console on and off and reconnecting the disc section of the ps2 discs were still not spinning. I decided this had to be an issue with the sensors however I cannot locate the back lid sensor so I am led to believe the previous owner of the console may have removed it for whatever reason. I have attached a picture of the insides of the ps2 exactly as they were when I first got the system. Any help would be greatly appreciated. 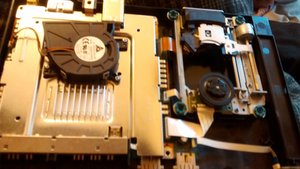 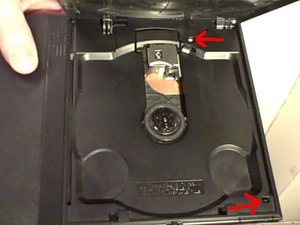 quick google search turned this up

The front sensor is on the power board which I can locate easily and I think the back arrow of this image is pointing to a tab that when pushed aside allows the disc to spin which I had already pushed aside. However there is supposedly a sensor in the insides of the console to the back left of the disc tray which I cannot find and when I search on google I can't find any image that both matches what the insides of my ps2 look like and show the sensor. This is the sensor I needed to locate. Thanks for the answer though. Much appreciated.

This is the problem. The sensor he talks about that is supposedly in the back of the disc tray is something I have failed to locate.

I'm having the same problem, back sensor is just gone. Did you ever find a fix?

Same problem. I'm thinking this model maybe doesn't have a back sensor (improved design?). My PS2 Slim looks exactly like yours on the inside and doesn't match any of the pictures people post. It also had no issues spinning until after I replaced the laser

My laser also seems to move when the lid is closed and AFAIK that means the PS2 detects a closed lid. So I'm still lost as to why it won't spin :(