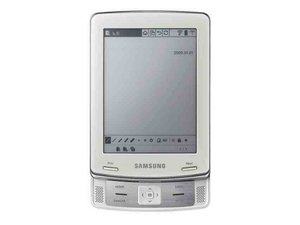 The Samsung eReader gives you easy access to more than a million downloadable books, magazines and newspapers offered by Barnes & Noble.

How can I fix a garbled e-ink screen?

I have a Samsung ereader E60 bought in the UK which uses e-ink for display. Afte carrying it around for a day in jacket pocket (soft down jacket) I noticed the screen was garbled and though the unit was powering on (a blue LED comes on) and parts of the screen flashed (the whole screen normally flashed 4 times while powering on) the display was bands of grey. The position of the bands have been static, but the grayscale within the bands change over time, and varied from reboot to reboot. Sometimes part of a band dispays some characters and sometimes not. The characters are from file names of documents in the device memory, and I have chekced this through USB.

My feeling is that either the display is malfunctioning or the display addressing hardware or software. The bands tend to lead me towards the former explanation. I have located the Samsung service manual for this product but its somewhat cryptic (I guess its not for Samsung engineers, as they are familiar with the board and wiring nomenclatures). I am technically knowledgable enought o take apart the device, but would really appreciate guidance in isolating the problem. Thanks

I purchase my E60 ereader on the 27the December 2010... The same thing happened, eventually the screen went altogether by the 21st January 2011. I am having terrible trouble with Samsung getting it repaired. First they told me it was my fault and refused to repair it under warranty, quoting me a minimum of £60 plus parts. I wrote a letter to Samsung. They offered me a free service on the 7th February 2011. Then they told me to take it to the wrong repairers expecting me to recover their error. The up shot of it so far is it is now the 26th March 2011, SIX weeks later and Samsung STILL have my unit and no one can tell me what is happening with it. In fact they have had it twice the time I had!!!!

On the positive side thank you Samsung for the £15 M&S vouchers for the inconvenience caused.... I DON'T SHOP IN M&S! Oh and they are still threatning to charge me for the repairs!!!

Kindle owners are having the problems.

try dealing with 3 then...what a nightmare!

Screen problems like you describe could be due to the flex cable not making proper contact with the circuitry on the glass layers. This may or may not be easily fixed, depending upon how the cable is attached. Sometimes there's just a clamp that requires more pressure. But usually it's bonded with adhesive, and this may be impossible to deal with without specialized equipment. But if you are able to open up the device and still have it operable, sometimes you can just try squeezing on different parts and see how that affects it.

Had the same problem on a used 5” (S-505) purchased in the hope of transplanting its screen to my dead unit.

Alas the problem was with one of the COG ICs not the controller.

Someone did suggest years later fusing the IC back on by spot heating via blue laser (GOGGLES!!!!) where the interconnects go, on the basis that the fail can be one of the contact areas on here rather than the ribbon cable.

The idea being that the spot size was smaller than the actual silver copper based micro links so fusing where the bad area was might achieve some level of function.

Incidentally the S-600 also has this “feature” which is why they don’t make these any more.