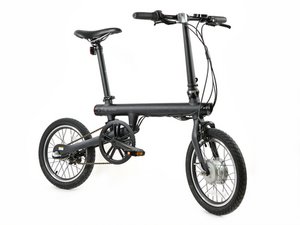 The QiCycle Folding Electric Bike is Xiaomi’s first foray into the world of e-bikes. It has a 250W high-speed motor powered by Panasonic 18650 lithium batteries. The Shimano Nexus 3-speed gear hub in combination with the torque measurement sensor gives you up to 45km bike power on a single charge. It also has a trip computer can connect to your smartphones via their special app and is–of course–foldable.

Bike shows errors and motor will not turn on

This week i bought a used qicycle. All seemed fine, but i wondered why the wattmeter always shows zero. The motor doesnt function at all. I tried to change  the firmware with the Chris app to the original one but that wasn't succesful either. I used DNS Changer as described in the post, put in the DNS IP,, paired with my google account, etc. If i tried to install the update the app allways shows "error on update 1". If  I use the original Mijia app and do a check, the check displays that everything is oK with the bike.

I also tried to disconnect the rear Cable (torque sensor cable?) as showed in a Youtube Video, and booted the Bikecomputer sometimes again-no result.Here in Germany nobody could repair a qicycle, i would be glad if somebody could help with this issue and donate something to this person!.

First Idea was to change the controller board..but maybe the motor is broken...i don't know how to test ist. PLZ HELP ME !!!

just try repeat upgrade when you got the error "error on update 1", it will continue until success.

Thank you Dir your answer. I solved the problem by changing the Android Smartphone. With another phone the update was succesful.