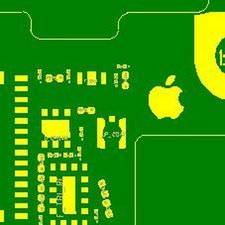 Hello. iPhone X came to me for motherboard repair (microsoldering). It has dropped to the floor and it constatly rebooting, apple logo appear for a couple second and then it rebooting and same continue until battery is dry. I started this repair with power supply connected to the iPhone and the same thing, rebooting, iPhone not going furher than apple logo then after couple seconds rebooting. So, I found out that when I unblug the charging port from the board iPhone rebooted normally and I noted that someone has tried to make factory deafault settings to it, so it started to finishing it (apple logo with loading bar). I waited and it finished the factory setting and ”Hello” screen appeared. At his point I turned it off and connected the charging port flex (same port) and it started doing exact same thing as before, constantly rebooting and cannot managed the way up to ”Hello” screen. Then I plugged a new charging port and connected it to computer, no broblem so far, I set it up as a new device and noticed that in some point it rebooted, but it rebooted all the way to the lock screen (so no stuck to apple logo anymore). Now I have been watching it as it rebooting after about every couple of minutes, then I realized that it has to be related to battery percentage changing. Every time it rebooted in cahrger it show + 1-2% more battery. But it charging atleast. No knocked components around battery connector. Is it hydra or something I don’t know yet. What you think?

EDIT: Problem solved! This was strange

but charging flex had short circuit and at least the microphone has smashed so.. when I replaced the charging flex cable the it stopped the random rebooting.

There haven’t been a lot of iPhone X micro-soldering repairs yet so classical faults aren’t identified yet. The base circuitry is essentially the same as older devices though, so the same troubleshooting logic applies. The challenge with the X is that most of the good stuff is stuffed inside the logic board sandwich so you should consider getting a special jig like the iSocket.

Have you tried a new battery?

Thank you for your responce. I have all equipment needed, iSocket, preheater that sandwich can easily opened, stencils and other stuff. Only need to purcahse components/chips ;)

I don’t have a new battery but the iPhone acts the same way in power supply, so I’m not sure it’s the battery fault.. and the battery percentage change either as I thought earlier. Maby I have to dig deeper. All proposals are welcome :)

Yeah, if it does the same with a DCPS, it's not battery related. I would take the same approach and check out the Hydra (Tristar) circuit. I would also look at the MOSFETS (Q3200/3201) near the battery connector first though because if they are physically damaged (easy to do when removing battery) they will cause similar symptoms.

This was strange but charging flex had short circuit and at least the microphone has smashed so.. when I replaced the charging flex cable the it stopped the random rebooting.