Any tips for replacing a speaker?

After normal usage for a couple of years, the sound from the right speaker on my MacBook Pro has become really distorted and isn’t sounding as good as it could. I am 90% sure the speaker is damaged as I took the base off and cleaned the entire area of any dust to no avail.

I know Apple is likely to charge over ~$800 to repair this, so hoping to repair myself. Are there any guides around for replacing the speaker? Specifically how to remove the old speaker and what to replace the glue with (tape/particular type of glue)? Can I use an iOpener to remove the glue?

If anyone has any experience replacing the speakers - would love to hear any advice.

See the middle image on step #12

review this answer Is there any speaker replacement guide? for additional details.

Thanks. @danj Would you suggest removing the logic board/anything else prior to applying the heat?

I have never had to use heat to get one of these out and I just use my fingers to pry it up.

The idea here is to warm not cook the system!You could also use an iOpener. I've not needed to remove anything more that I outlined in my answer.

In my case, I didn’t use iOpener. Instead, I used hairdryer and heated the part of the body where the speaker glued for about 5 mins. Then I put a metallic ruler into the gap between the speaker and enclosure, which was the most difficult part of this replacement. 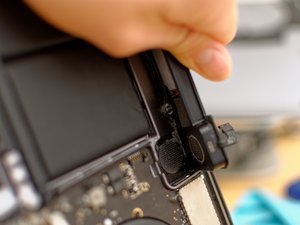 Then cleaned up the adhesive on the enclosure. After that, I put double-sided tape on the speaker side. it is a little thicker than the original adhesive but strong enough to glue on the enclosure. The most important thing when you do that is not to make a gap when you cut and put it on the speaker. Just glue it as original does. '''A gap between adhesives cause distortion and cracked bass sound. 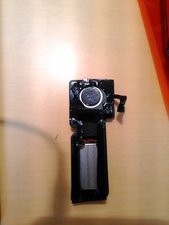 Do you have a link to the adhesive you used?

I just finished replacing both speakers in my 2017 Macbook Pro with Touchbar. The procedure isn’t difficult, although in an abundance of caution I spent about half a day to research, prepare, and conduct every step very carefully. Here’s the main discoveries:

The speakers sounded great. Also, I did not remove the logic board or anything else. There is no need to do this, but, know your work style. If you aren’t good with precision work, are over-caffeinated, shaking hands, or prone to frustration and breaking things, you may want to remove the logic board. However, this definitely is not necessary. Finally, I’m an insane perfectionist, especially with tape sealing surface area. I’m sure it would work well with less effort.

PS I used something like an Exacto knife as necessary. I also used this is precisely and gently remove the tape backing once it was ready (along with tweezers). The backing is tough to remove with your fingers if you're dealing with small pieces.