So I've got a M.2 Samsung EVO SSD with OSX installed and all my other files are on a 4tb WD Red HDD 5400rpm - music included.

Can't remember if this happens with video files as well but it's been happening quite often whilst listening music on iTunes: every other song gets interrupted like a glitch or skip or something. And it ain't corrupted files - if I play it again it will play just fine.

Anyone knows if this happens because the files are on a much slower drive? But then again shouldn't it have a buffer of some sort so this wouldn't happen…? I mean even old CD readers have a buffer so it won't skip so it should be common sense right…

EDIT to include a picture: 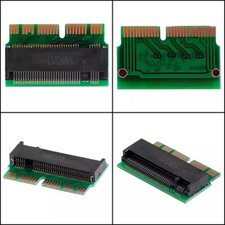 TL;DR: avoid APFS. It’s promising on paper but too buggy.

Further development might change that but as it is it ain't worth it.

I’ve had issues with APFS before but thought it was user error: couldn’t install an APFS drive on a new machine that haven’t been upgraded to Mojave and wouldn’t ‘see’ the drive - an iMac so imagine the hassle of opening it up again as I didn’t have a Mojave USB ready since I wasn’t expecting to have that issue.

To this day I can’t run Mojave on a RAID zero system - the option is there on the install but it won’t work.

A friend is having lots of issues servicing Mac Pros - every time it gets an update its drives fail. So much so that he started to tell his clients he won’t service any machine with a system later than Sierra.

But till this latest problem I still haven’t realised it could all be due to APFS - automatic and ‘mandatory’ with High Sierra and Mojave.

So what I did and recommend if anyone wants Mojave running on HFS file system:

-Install carbon copy cloner on either Mojave or High Sierra on the Mac you having issues due to APFS;

-Get a external SSD with HFS file system big enough to get the system cloned into it - and clone it.

-Reboot, press option, boot into the external drive. Run disk utility, wipe internal drive as HFS, run carbon copy clone again and this time do it the other way around: clone from external to internal drive.

There you have it: Mojave running on HFS. Or High Sierra if that's what you want.

Still on testing stages but all seems to be running ok and the issues reported on original post are gone!

Just don’t know what will happen if there are any other updates but with Catalina soon to be released I don’t think Apple will put any more effort in updating an OS that’s soon to be ‘obsolete’.

And when Catalina does get released I’ll do the same as above to get it running on HFS.

Until further development and considering my issues and my friend's issues I can’t un-recommend APFS enough!

EDIT: interesting my answer got demoted to ‘update'…

Your boot drive (SSD) has other functions like Virtual RAM and caching. While it might appear you are reading from the other drive it still needs to put the data some where if you don't have enough RAM available it will leverage the drive for it and the app often needs caching. All of this is done on the SSD!

I was thinking it might even have something to do with APFS (SSD) vs HFS (HDD) or maybe a Mojave issue as I've never had this problem before on a 2011 iMac with SSD (regular 2,5") + HDD (non-NAS 7200rpm) both HFS running Mavericks…

This solved the issue:

Basically the adapter can touch the metal plate in the computer's slot so you need to cover the adapter with thermal tape like so: 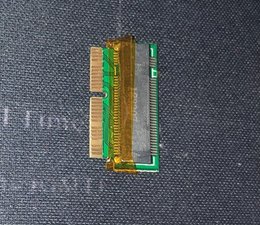 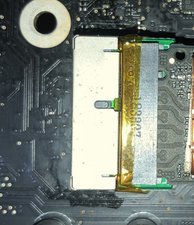 Interestingly my answer got scored down by the person who suggested to replace the drive with the Apple proprietary one. That same person is always saying to replace instead of trying to find a solution to fix the problem which I wonder if this is the place for that.

I mean is this ‘Ifixit’ or ‘Iboughtnewtoreplaceit'…?

Your M.2 SSD is failing! This is a common issue with M.2 SSD via an adapter. What you don’t see is at the low level of the read/writes to the drive you are encountering CRC errors which causes the drive to wear prematurely.

While this setup is a close fit (appears to work) in truth your setup is like a mis-timed gear set so over time the gears wear out and then fail.

I realize people want a cheaper solution to the more expensive Apple or even better 3rd party replacements (OWC & Transcend) over time this setup fails! I have a drawer full of them!

You’ll need to decide which in the long run is cheaper. Putting in another M.2 SSD and with the M.2 adapter or go with the better SSD drive.

Hint: I only use the correct Apple drive and I won’t put in a M2 drive into any Mac at all!

What you discovered is differences between the two file systems gets into the dialog as APFS is more chatty as it does a lot more movements unlike HFS.

What you hit is an issue I've seen on SATA based systems running APFS as the copy on write aspect of APFS hits a limit with SATA with its limited queue depth unlike the PCIe deeper queue. Here the stability of the adapter and the M.2 SSD is breaking down.

Here's what Apple has on APFS & HFS+:

I didn't went to the cheaper option here. If you read over there it's a 250gb Samsung EVO 970 - I'd argue is more expensive than an Apple equivalent..?

I went for speed - apart from the Samsung PRO the 970 EVO is the fastest out there (or at least it was when purchased some 6~9 months ago).

How could I check if there are CRC errors and drive failures? Any app or maybe the Apple diagnosis…?

HFS+ Vs APFS - APFS is a more chatty dialog. I personally don't recommend using it on SATA based systems (HDD or SSD) as unlike the PCIe interface SATA only has two queues whereas the PCIe offers much deeper queues. The lack of queues slows down I/O events.

So what works with the older is not necessary going to react the same in the newer system, which is the case here.

And lastly, Mojave doesn't have any direct bearing here, other than the fact your SSD is setup with APFS and as I described APFS is very chatty I/O over HFS+ so M.2 SSD's are going to have a harder time with all of the CRC errors being created.

Mojave won't allow you to setup the boot drive with HFS+ so you are being forced forward. You could wipe the drives and install Sierra (not High Sierra) but then you loose all the cool stuff Mojave offers. It really doesn't address the root issue only mask it a bit.

Think of it this way... You have an old car which the transmission is worn, a trick dishonest used car salesmen would do is put sawdust into the oil! It didn't fix the problem only hide the problem and create new ones!

I do know they're different I was just mentioning I never had this issue before in older machines running older software on HFS system...

About the CRC errors I found one on the HDD and zero on the SSD.

Used DriveDX app as per Google search. Could post the log but it's too long and there is a character limit here…

Is that app reliable enough or are there better apps for this?

What is reported is a hard CRC not a soft CRC. Basically, one that could not be corrected.

One of the problems in measuring is the limits of the tool you use. I love DriveDX for reading S.M.A.R.T. data from the drives.

I did not find it offering deep enough information at the lower level of the dialog. I was lucky! As I was supporting an engineering firm who had the chops to not only understand drive interfaces they had the tools to both make the needed test rigs and measurements. While we we testing the older PCIe based drives things really haven't changed. The Apple PCI interface is not the same as the M.2 interface. While close they are not the same. Timing is everything! Thats the issue here.

My drive ain't dying it's an APFS issue . It’s promising on paper but too buggy so far.

Running Mojave on HFS and those issues disappeared…