I got a problem with my Macbook Pro Mid 2012 recognizing its battery. At some point while using it it suddenly shuts down and won’t start again unless I plug in the power adapter. In this case system stats show that the battery is not being recognized. My first attempt of solving this problem was to pop the bottom cover off, disconnect and reconnect the battery cable from the logic board - pop the cover back on and suddenly it starts working again as if nothing happened.

Unfortunately not for very long periods of time. Sometimes hours, sometimes days. This behaviour is very consistent. It shuts off, I reconnect the battery, it starts working again for a limited period of time, it shuts off again and so on.

Then I ordered a new battery, the old one was kinda weak anyways. But the new battery didn’t solve the problem either.

Here are some coconut battery stats (this is with the replacement battery) directly after the disconnect reconnect game. 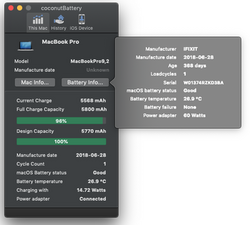 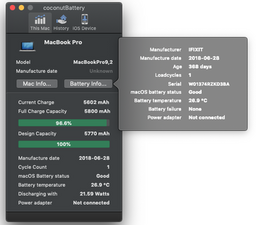 Some more information about the history of this laptop: I bought it used and non functioning from a friend (suddenly stopped working and won’t turn on again) for a very low price so I tried my luck, sent it to a repair company in Berlin to have them have a look at the logic board. They replaced the display cable and the charging electronics (that’s how they called it on their paper). I didn’t mind cause I got a working macbook for a good price including the repair that lasted me about 4 years until now. I put in more RAM and a SSD and for some time I used a SATA3 adapter to use an additional HDD instead of the optical drive. sooo…

Any help how to proceed further will be much appreciated :)

Tough one. Just a hunch, please press the battery test button both when it is running and when it shuts down and let us know your results.

when it is running the test button functions normally, when it shuts down the button appears to be dead (no reaction at all)

I wish I could be helpful but there’s not much to work on here. Battery data are more than good and a repeated behaviour with two different batteries points to the logic board. There’s not much one can speculate without going through schematics and thorough testing..probably something along current sensing but it wouldn’t be a typical DIY repair.

Yeah, I understand that. I'd really like to understand what is causing the problem to be honest, even if I couldn't fix it myself. I was hoping that there may be other hardware involved that could be swapped out more easily and less costly than the logicboard. But thank you very much for your answer still!

@pinguur There's plenty of things in this world I'd like to know better but time is limited and things are complicated. If you have a passion and lots of patience you may end up finding out what's wrong with your board one day. If you need it for work or study though, I'd warmly recommend to pay someone who knows the job or just replace the board as there's nothing in between board and battery one could replace.

You're right, good thing is I don't really need it to function in laptop mode at the moment - and it works when its plugged in. Chances are high of course that I won't find out whats at fault and some day I need to get it repaired professionally.

Does the issue go away with the original battery installed?

If multiple batteries are behaving in the same way, the issue is most likely not with either battery, however if you’d like to try another replacement battery, you can contact iFixit’s Customer Support and provide them with the order number and the same details provided here.

Your issue could be a caused by a few other components, namely the logic board, MagSafe board, or could even be a software conflict.

To rule out software as a cause, you can try performing these steps to see if the issue goes away:

Otherwise, if the issue persists after performing these steps, then the issue could very well be other hardware.

I hope this helps!

How to verify and repair Mac OS X Disk Permissions

How to Run First Aid with Disk Utility

no, the original battery and the new battery behave in the same way. I performed your recommended steps but unfortunately it didn't help. Still the same problem. Is there anything else one could do to pinpoint the possible reason more? With swapping the logicboard being the last option to try? Any kind of test to run maybe? I'm just guessing and I suspect that my capabilties are kinda limited but if there's anything to try before sending it in I'd like to try that.