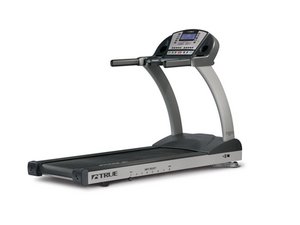 A treadmill is a device for walking or running while staying in the same place.

My Pacemaster Premiere EXT that's over 10 years old and had been sitting a while turned on fine after a thorough cleaning but slipped a bit, so then I tightened the tread belt and the drive belt as per the manual's instructions but it kept slipping after each adjustment.

I’m not sure if I reached the maximum number of turns before it says to contact a local dealer for repair, but I don't think I quite got there before the next thing happened.

At that point, it begins the start up sequence after the countdown, i.e. the drive shaft turns a few degrees or so, stops, then rewinds, stops, throws error 300 and beeps loudly until shut off.

I found out that error 300 meant a problem with the speed sensor. I unplugged and plugged in all the connectors I could locate in case some corrosion was causing an issue, but same problem.

I then located the speed sensor (labeled strobe on the lower circuit board) and tested the red and white leads with a multimeter, among the red/white/black wires, based on a YouTube video, which then showed a drop in voltage from 5 to 0 whenever I obstructed the speed sensor's gap.

It seems like the sensor itself gets power, opens and closes correctly (though not sure how fast because I think the multimeter takes a moment to adjust and maybe averages over time) corresponding to the motor shaft turning, but I can't tell beyond that why the signal is not being received by the top circuit board.

I tried - awkwardly, stretching, fumbling - to test the voltage of various combinations of wires to see if, upon startup, the speed sensor is either receiving or sending an initial signal via change in voltage to confirm that it got that signal, but I don't know if that's how this treadmill works (the one in the video did something like that), which combination of wires to look at, or if I even did that test right, but if any of them should have changed during that brief time period I didn't see it on the multimeter.

I'm guessing it could be a problem with just about any component involved in sending, receiving and processing the speed sensor signal, but have no idea how I would diagnose that using the multimeter. There's gotta be several places I could test: between the speed sensor and board, between parts of the lower board, between the lower and upper boards, possibly even from one part of the upper board to another.

I'm not even sure - is the black wire ground and red the power, so white would either “short" the circuit when closed (obstructed) and thus all 5 volts would continue through, displaying 0 voltage difference with the multimeter leads on red and white, and then 5 volts when it's open because the sensor sees itself, and blocks the signal (causing the 5 volt difference and thus reading) or am I all wrong?