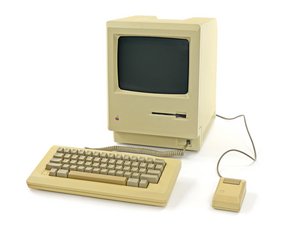 The original Macintosh desktop computer, initially released as the "Apple Macintosh" in 1984.

So I have just received a Macintosh Classic from eBay, with a reported failed HDD but upon inspection it's clearly been knocked about during transit. A refund isn't an option as I got it for next to nothing, and I really want to get it repaired.

Upon turning it on, there was no display but I got the chime sound. I opened it up to reveal the board on the back of the CRT had come loose, so I reattached it and booted it back up. Not it makes a horrible buzzing (kind of electric) sound, which made me immediately turn it back off. I reopened it and booted it back up to find that the sound was coming from the clear tube that holds the board. Also, you can see faint blue “electric bolts" from said (and pictured) tube.

As the board was off when I received it and I can hear it's coming from there, I think it's clearly something to do with that. But a more educated guess and/or some tips would be fantastic.

I have checked for bulging capacitors and all of the usual things and all appears to be ok visually. As I said before, when the board was off there was no buzzing sound, that only started when I reattached it. But when he sent it, I seen pictures of the same Macintosh displaying a faulty HDD image, so I don't think anything has failed due to natural causes in the time it took to ship it.

It's a Macintosh Classic by the way.

Many thanks in advanced.

@andyc7117 if you can see "faint blue “electric bolts" from said (and pictured) tube" that means something is not making proper contact. Double check the board and the way you reconnected it. There are some very high powers on a CRT and it'll knock you on your butt if you make mistakes with it. So be careful and familiarize yourself with working on CRT's. That stuff can and will kill you if you are not careful. Take a look at this guide first ESD Safety Technician Safety

This machine had no hard drive, it booted from 400k floppy disks. You have pictured the back end of the CRT. Be very careful fooling around with this as it will carry enough juice to knock you across the room.

Why did you buy a machine you know nothing about?

The machine has a harddrive, it's SCSI. I'm well aware of the dangers of CRT monitors. As mentioned in my description it's a Macintosh Classic.

As for buying a machine I "know nothing about".. I've worked on many PCs over the years, all of which I knew nothing about until I started to work on them and learn them.

The buzzing is often times the flyback transformer. This was a common failure with the classic Mac’s

Did the display get fractured? If it has lost its vacuum you’ll need a new tube. If the connector just got knocked off you should be OK.

Finding the needed part will be a bit of a hunt!

Thanks guys, it turns out there was a fracture on the cathode where the 6 or so pins meets the board pictured, so the CRT lost its vacuum. A new one has been ordered!