Repair guides and support for your LG TV.

As the title says, this TV I am trying to fix for a friend of mine. The power on flashes twice red, then turns blue (on). However you get no picture and no sound.

I have thus far checked power in, and it is present at the connector jumping to the main board itself. LED cable voltages ranging between 100-300v when powered on. Not really certain what to do from here. How do I know my main board is good, or sending the correct voltage to the Tcon? I don’t see the same helpful type of chart located on the pcb like the power supply. 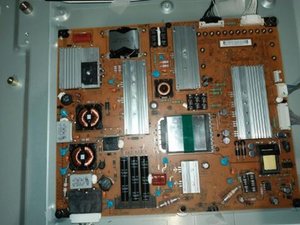 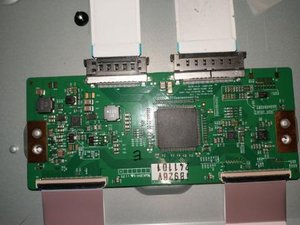 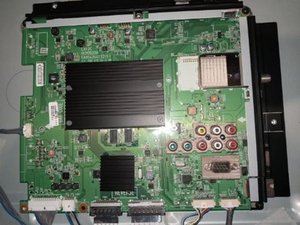 Anybody ever fix this. I have the same issue as OP. The power light turns from red to white but I get no picture pr sound

My understanding is that re-balling the BGA on the main CPU fixes it. May work with a baking cycle in the oven.

@kg1117 check the fuse on the T-con board and see if you have around ~12V on it. Double check the voltages on your LED connector again. 100V-300V is to much of a variation. Measure all the outputs on the power board to the main board and let us know what you find. Post some good pictures of your board with your question as well as the interconnect wiring. That way we can see what you see. Adding images to an existing question

This switch mode power supply develops Stand By 3.5V at all times when AC is applied. At power on, it develops 12V and 24V for the Main board.

It develops 50V for the LED Backlights.

When the controller chip on the back side of the SMPS receives the PWR-ON command 3.41V via P201 Pin 1, it turns on the Relay RL101 which supplies AC to the bridge rectifier BD101. The primary section (Power Factor Controller circuit) increases its current supplying ability.

Both Primary fuses F101 and F501 now read a little more than 396V. D253 receiving switching pulses from L601 develops the 50V for the LED backlights. When the SMPS receives the DRV_ON command from the Main board via P201 Pin 18 (3.26V) it turns on the on-board Inverter to start driving the LED backlights. The backlight brightness is controlled by the Main board via PWM Pin 22 and Local Dimming signals via P832.

Disconnect P502 on Main board.

Note; If there is a problem with a load from the panel backlights, you can remove AC and Disconnect P202 or P203. When AC is reapplied, the Backlight LEDs should turn on for about 4 seconds and then shut off.

So, let us know what you find out

Well. Fuse on the T-con has 0 volts across it. Also, F101 and F501 both have 330V across it, not 396V. I had to order a mix of jumpers in order to complete the second half of this testing they should be arriving within the next few days.

All voltages are present at the jumper to the main board. The other thing that I went back and checked were my LED voltages, they range from 19-36V with the power on (blue light).

I tried to upload images, not sure if they’re going to post….

T-con at 0V is odd. Let me check if I have more information on that.

Reflowing the XD BGA under the big heatsink fixed it for me.

These systems have a silver BGA chip living under a big heatsink called the XD Engine. Like a lot of BGA parts on consumer equipment (GPU, Xbox, etc), they eventually lose connection to the underlying board. A local shop would pull it off and reball it for $70. Lots of places on eBay also offer that service. So I thought I might try to reflow the chip.

Once the heatsink is off, you will see a silver chip with the LG XD logo on it.