Is this from liquid damage or something else?

I have an iPhone 5 that was “liquid” damaged and am trying to see if I can get it working enough to get the photos off it. It currently powers on for about 2 seconds and then loops.

I removed removed the logic board and EMI shields with the intention of cleaning, but found large parts of the board covered in a hard, black, wax like substance. It’s deep enough to almost cover some SMD caps/resistors and surrounds a number of the chips. 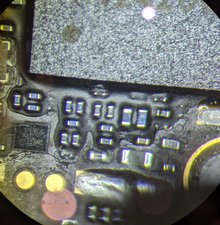 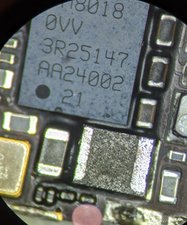 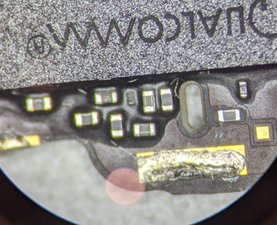 I’m familiar with electronics, but have never look at an iPhone before. Is this some sort of normal potting/thermal transfer material, or is this something left behind by whatever was spilled on it? I assumed the latter, but it’s very hard.

That is underfill near the components. They are generally used around and under BGA (Ball-Grid-Array) chips so that the logic board has any flex / shock it decreases the chances of these solder balls under the chip from cracking / disconnecting from the board.

They also help protect against any water ingress going under the chips too.

Thanks Ben. Glad to know it's normal and not related.