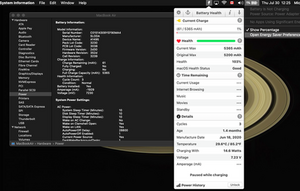 Through copious amounts of googling, I've discovered and tried various remedies: SMC and NVRAM reset, unplugging the battery and draining the caps, even installing a new battery. None of these fixed the problem. My charger tested good and I was able to charge a friend's Macbook Air with it. Trying my friend's charger on my Macbook Air I experienced the same problem as described above.

My thought is that the the DC-in board could be damaged, but I don't know how to test the board. Is there any specific testing I could with a multimeter to check for voltages? Any damage that I should look for if I remove the board to inspect it? Could the problem be on the logic board?

Other than this issue, the computer runs perfectly, although the battery is draining a bit more each time I boot the computer, so I will soon not be able to boot. 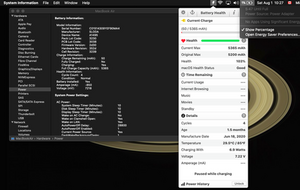 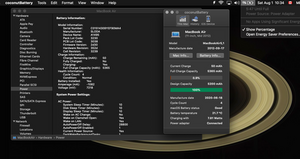 Let’s get a better view of things, install this gem of an app! CoconutBattery take a snapshot of the apps main window and post it here for us to see Adding images to an existing question

Hi Dan, thank you for the reply. I was unable to install CoconutBattery because my battery is down to 1% so I had limited time to be able to take the attached screen shot. I did have a different battery health app installed previously and the details can be seen in the screen shot. I also added the Power screen from System Information. Note the negative Amperage indicating the battery is draining even though the charger is connected.

Did you use a metallic tool to disconnet the battery. If so maybe there was a short between the power pins (12v) and the data pins (3.4v) on the battery socket.

Here’s more on the knockoffs:

● Don't Replace Your MacBook Charger With a Cheap Knockoff 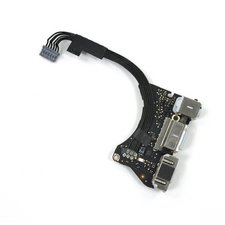 Hi Dan, thank you for the reply. My charger (OEM Apple) is able to charge my friend's Macbook Air, and trying his charger (also OEM) on my computer, I get the same behaviour described in my post. I've also inspected the Magsafe port using a 10X loupe, and cleaned it using 99% isopropyl alcohol, and checked the connector for stuck pins. I did not see any burn marks or carbon buildup, but gave the terminals a scrape with a pin just in case there was any corrosion buildup on the terminals, and the connector's pins return to their proper position after a slight push with a pin.

@miguel_sanchez - mmm ... Newish battery which by your output has only had 3 cycles and is in good health. So either the battery has some strange issue or the charging logic is having a problem, yet its charging with 14.6 watts!

Let's do this shut the system down fully, leave the charger plugged in and forget about your system for a full 24hrs. Don't do anything to it, let it sit then lets get another output of where things stand. If you can try to get CoconutBattery installed as I'm more comfortable with its output and trust it.

Hi Dan, I left the computer plugged in as you suggested, and I installed Coconut Battery. I added the screenshots to my original post.

Battery level is still at 1%, but now status is "5:47 until full" and this time has not budged in the last 15 minutes. Note the negative amperage again in the Power screen. Magsafe light has remained orange since it was plugged in more than 36 hours ago.

Did you have a liquid spill as some point into the keyboard or trackpad?

If that doesn't change anything that only leaves us with the logic board its self.

No spills, we're careful about how we use the computer. Will the magsafe light up when the I/O board is defective? Are there any test points on the board that I can check with a multi-meter to confirm that the problem is in the I/O board and not in the logic board? I'd rather know which board is bad before I spend any more money on this computer. I'm handy with tools and basic electronics but I've had a difficult time with this particular issue.