Built-in display has backlight but no picture

I mainly use my MacBook as a desktop, so I keep it closed and connected to external monitor, keyboard, trackpad, and speakers most of the time. There was no damage done to it — it’s mostly at the same spot on my desk, I don’t even touch it usually, and it did work perfectly fine the previous time I used the built-in display around a month ago.

What I tried so far that didn’t help:

Turning it on with no monitor connected lights up the entire display with the center part then fading to black. Opening the lid while it’s already on results in a black display. The backlight works fine since the apple on the back glows. The built-in display does show up in system information.

If that matters, I had the battery replaced in December because the original one had swollen to the point of it being unable to lay flat and the trackpad also became very stiff to click.

As far as other parts of it go, it still works fine as an oversized Mac Mini. In fact, I’m using it to write this question.

What else could I try to fix it?

Edit: I also tried disconnecting and reconnecting the cable in the lid, that didn’t help either.

Running a system with the lid closed can cook the T-CON logic which in this series in within the lid at the very bottom just above the heat sinks heat fins! 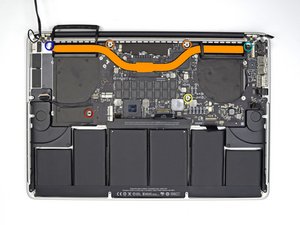 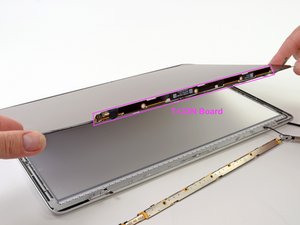 I recommend leaving the lid open so there is enough ventilation.

At this point you’ll need to replace it if you need the mobility. You want the Samsung version of the display Apple P/N 661-7171 The LG version tends to get a ghosting issue (and tends to be the cheaper part).

I just turned it on today and the screen fixed itself. That's weird. I almost bought a replacement.