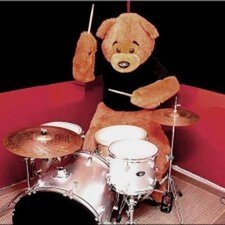 After turning on, monitor dims then eventually goes black

Hello! I’ve been using several Thunderbolt Monitors for the past few years and only one has ever given me any grief (it seems I’m quite lucky in that regard). I’ve tried everything to get this monitor working, and at this point, it’s almost a matter of pride—I don’t want to let this thing beat me, lol! Here is the issue I’m having:

After connecting the display to my Macbook Pro and turning it on, it never fails to dim after several minutes of use. None of my other displays have this issue, and it does this with any computer I hook it up to. I primarily use my displays together, daisy-chained, but the problem occurs even if I just have the one malfunctioning monitor connected directly to my MBP.

I’m pretty sure that even when it first turns on, it isn’t at full brightness (I’ve used one of my other TB displays as reference), but it’s pretty close. Eventually (after 1-6 minutes), it dims, dropping down to around 65-70% brightness. Using the brightness control in System Preferences lets me turn down the brightness but even with the slider at the fullest setting the most I get is that 65-70%. If I unplug the TBolt and power cables, wait a bit, then plug them back in, SOMETIMES I can get it to work again. But most of the time it needs to be off for several hours before it goes back to “normal”.

And finally, it’s started to shut off after using it in the dimmed state for more than about 20 minutes. I can’t tell if it’s just the backlight or if the entire device is shutting down, but I’ll check next time it does this and update. Once it started this behavior a few months back, I stopped using it altogether. But now I’m back banging my head against the wall trying to get it functioning properly.

Here is what I have tried so far…

All of these repairs went very smoothly, and I’m quite familiar with the internal topology of the TB Displays now. I’ve been repairing electronics and building my own computers for two decades now, so I’m fairly certain I didn’t mess anything else up during th repairs. Nevertheless, my exact same problem persists, seemingly no worse or better.

Below is a photo of my last two displays—broken one on the left, normal one on the right. It’s very hard to take an accurate picture, but I’ll say that the disparity in brightness between the two monitors is WAY more noticeable in person. 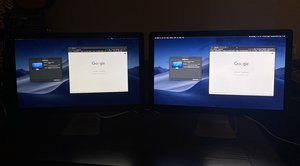 Also including a screenshot of TBolt system report in case that’s helpful: 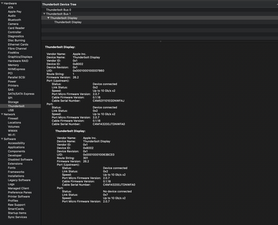 I have a new LCD panel coming in next week, but I just don’t feel like that’s going to help. And it’s the last idea I have as to what could be replaced to fix my problem. So, I’m hoping maybe someone here will have a suggestion or something else I can try.

Any advice would be very much appreciated!

UPDATE 08/23/2020: The monitor went out during tests again today, and I was able to confirm that it is the backlight that is shutting off when it goes dark. If I shine a powerful light into the screen I can still see the OS on it. Should be receiving the new LCD panel today, and I’ll update again once that’s installed.

It's an indication that your system is crashed.

@sanjeev9910 which system? can you be more specific?