I replaced the battery in my Macbook Pro 13” Retina Display Late 2013 (whew) with no issues. A question though:

The battery is built on a plastic frame with four mounting holes which match threaded holes in the computers baseplate, but there are no screws holding the battery in place - double stick tape does that job (a design change I guess). The four holes in the battery’s frame are filled with rubber plugs, which appear to do nothing but hide the holes (can’t say I blame Apple for this, without plugs it would look like they forgot to install screws). OK, that’s fine.

The new battery also has the mounting holes plugged, but these plugs are different - they have a “tail” that protrudes through the hole, interfering with the battery’s fit to the baseplate. The old battery’s plugs had no protruding tail, they appeared to be heat-staked flat on the bottom. I had to remove the plugs from the new battery, else it would have refused to fit flush, preventing the adhesive from doing its job and possibly preventing the case from closing.

Why are the plugs included when they interfere with the installation and have to be removed? The instruction made no mention of this. Am I misunderstanding something?

Here’s an image of the battery to help you 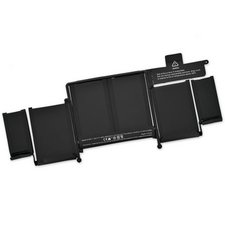 Can you point out what you are seeing different.