On starting up, it chimes, you can hear hard drives working. My FW800 external drives all flicker as normal while they mount; ditto my G-Speed eSATA external array , my USB scanner and printer each make the usual noises, suggesting USB bus OK too.

Opening up the computer it was very dusty - I blow the dust out a couple of times a year by bringing the airline from my garage compressor into the house. Blew it out, computer fans all turning silently, the small fan on the ATI graphics card felt stiff and wasn’t turning .

I have a couple of previous generation Mac Pro computers , 4 core instead of 8 core , slower bus speed etc ; tried the graphic card out of one of these , no good . Also tried the system drive from that machine in case mine didn’t have correct drivers , no use .

I’m leaning towards thinking the fan on my graphics card has seized up with dust & dirt, causing the card to overheat. Does this seem the most likely scenario? The computer is normally on all the time since if I’m not sitting at it, it is either downloading or processing video or photos. I recently got the other two Mac Pro’s which were being disposed of at work to take some of the more mundane tasks on.

After the graphics card, I can only think the power supply might be bad - not sure if my 2008 machines will have the same PSU ?

Would appreciate any thoughts , anything I’ve missed ?

Can you open up the machine(including the PSU, and graphics card, if possible) and check for any leaky or bulged capacitors like the picture below? 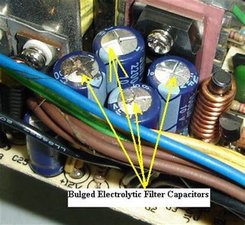 If the computer or its components use SMD capacitors (see picture below), check if the board has a fishy smell. 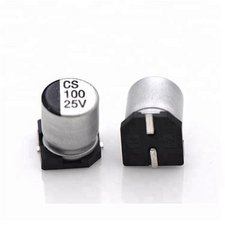 A Capacitance and/or ESR meter may also be helpful in this task.