Shuts down at around 50% after Battery Replacement

Hi, I replaced the Battery of my iPhone 8 Plus 2 days ago but it shuts down at ~50% even after following the instruction to recalibrate it. When plugging it in after it shut down the percentage shows 13% or 20% but shoots up to around 50% within a minute of charging. The battery health settings as well as coconutBattery show 100% Health. Should I keep calibrating the battery or is the battery defect?

Update: After it shut down I let it sit for around 12 hours to make sure the battery gets as "empty" as possible. This caused the phone to start charging from 1% as intended. However, as seen on the image below, it jumped to 100% within a short time after it reached 50%. I had let it charge for another few hours after it reached "100%", and used the phone as usual after unplugging it. It worked fine and the battery lasted long until it reached 49% like before, resulting in the phone shutting down abruptly. I don't know what to do at this point, should I request a replacement from iFixit? Assuming it's maybe a defect. It's an iFixit Battery by the way. 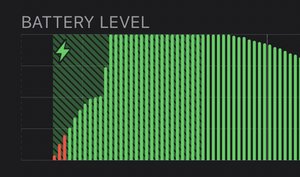 Update 2: March 16th. iFixit has sent me another battery assuming this one has a defect.

Update 3: March 29th. The new battery has the exact same behaviour unfortunately. After several premature shutdowns, iOS has now applied the Performance management (also known as Throttling). I will leave it enabled for now to see if it somehow manages to calibrate the battery now. 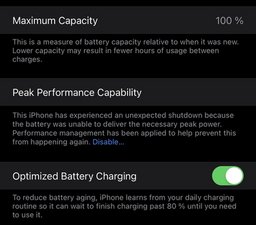 Update 4: April 10th. The problem still has not resolved yet. In fact, iOS now shows a "Service" status in the Battery health settings. Telling me that the "battery's health is significantly degraded" even though the Maximum Capacity shows 99%. Pretty weird, pretty interesting. 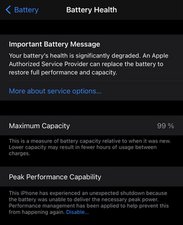 Update 5: May 10th. Still no improvement. Still hasn't calibrated. Maximum Capacity reports a value of 56% now. Even though the battery is less than 2 months old. 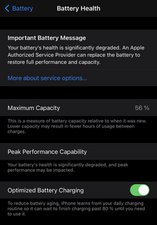 Final update: June 20th. I contacted iFixit Support once again and they sent me a third battery free of charge. Fortunately this time the battery has no defects or some sort of. No sudden shutdowns etc. One thing I’m not very satisfied with is the capacity of the battery. It has the same capacity as an original Apple battery for the 8 Plus but it feels weaker. If I remember correctly when my 8 Plus was new the fresh apple battery inside it held charges for longer than this new iFixit battery. Though the difference is that back then I was on iOS 11. So that might make a difference, I guess. But anyways, this new battery should allow me to use my 8 Plus for a little bit longer until I finally upgrade to a newer iPhone.

Could be a battery defect. Cheap batteries from Amazon and eBay aren't very trustworthy.

Was it a cheap battery, or described as "0 cycles"?

As some sneaky vendors will just reset the charge count on a battery making it look new!

Send it back, and get a refund. Choose a different seller/supplier, as chances are, if they're selling sub par replacements, the next one will be too

It's an iFixit Battery, bought from iFixit.

Cheapo after market batteries do this a lot.

If its one of those cheap Amazon batteries with the gold and brown star sticker on it saying 'Good Quality' you are in for a treat. It's usually the phone not reading the batteries percentage properly as there is a communication error between the phone and the battery. Also, if the battery has not been re-programmed to have the same IMEI as the old battery to trick the phone into thinking its original that can spark up a few issues too. Oh, and those batteries labeled 'Higher capacity' can cause a few issues in an iPhone too. I wish you luck!

Nah I bought the battery from iFixit. But thanks, hopefully I solve this problem soon.

@tanner02 Huh, my bad. It's your battery not being reprogrammed right then. Take it to a repair shop. They got all the tools to help you. Pretty simple fix if its a known good quality iFixit battery.

What a disappointment to be honest. I thought iFixit was supposed to offer a seamless DIY repair experience. But looking at this stupid problem lets a more pricier replacement at the Apple Genius Bar look like the better option. How pathetic.

@tanner02 it is pretty pathetic but this site is for people who actually have some what of an experience with what they're about to try.

This is not the first time I replaced an iPhone battery though, but its the first time having this calibration problem as well as the first time buying a battery from iFixit. Quite ironic since those that worked were cheaper than this iFixit Battery.

Same issue on my side. I changed battery recently. I follow steps for recalibration as well. Battery showing 50% when phone shutdown. I tried DFU restore and it did not help - phone shutdown at 31% once and then again at 50% each time.

Btw: Iphone 8 Plus/ battery from iFixit

If you still have haven’t fixed your problem please contact iFixit Support. They will send you a new battery free of charge.