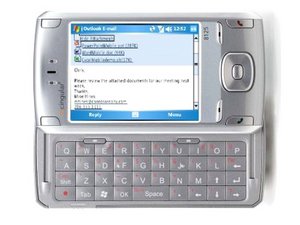 For help with common problems, visit the Cingular 8125 Troubleshooting Page.

This phone is a Cingular 8125 PDA, which runs on Windows Mobile 5.0. It was first sold in 2006. It measures at 4.25 x 2.83 x 0.93 inches, and weighs 5.3 ounces, and the basic cover is silver. As a PDA, it is enabled with Internet browser access (Internet Explorer) and email access, as well as many of the Microsoft Office pack, including Word, Excel, and Powerpoint. It has a lithium-ion battery, a slot for a memory card, and a camera, with a 1.3 megapixel camera. It has a slide out keyboard, and a set of buttons on the front of the camera to control the basic functions.

Compared to other models from the same time, in the same “pocket PC” category, the Cingular 8125 has a larger screen, the beginnings of a better application compatibility, with the most updated OS of the time (Windows 5.0). It only has a singular, fullsized SD card slot, while other models of the time came with both a fullsized slot and a mini SD slot.

It was part of the HTC Wizard series. It was only the second of its kind, seceded by the Cingular 8100. The 8100 weighed three gramms less, at 165, but the 8125 had the upgrade of a digital camera, with 1.31MP and a 1x optical zoom. Otherwise, these first two devices were incredibly similar, with the same amount of memory and the same operating speed. The next model, the 8525, was released only 10 months after the 8125, in November. It was even heavier, at 176 gramms. It used a 32 bit Samusung SC32442 for its CPU, as opposed to the 8125 and 8100 which both used the Texas Instruments 32 bit CPU. The phone was also taller, although slightly thinner, providing more room for top piece buttons. The 8525 was managed by a scroll wheel. The camera on this model was only slightly updated. And finally, the battery was improved in the 8525; it was now a lithium-ion polymer battery (as opposed to lithium-ion), which had larger capacity of 1350mAh (the 8125’s battery is 1250 mAh).