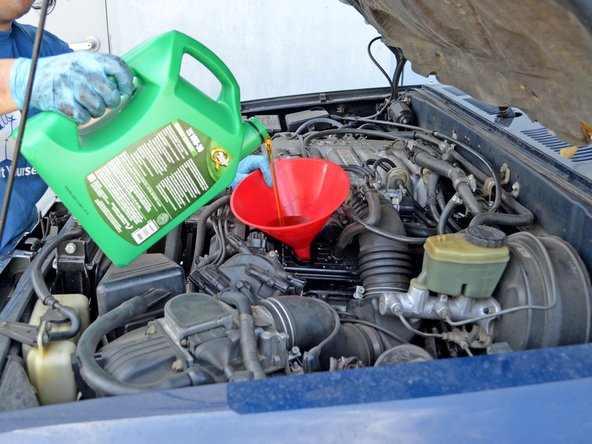 Change the oil in your '90-'95 Toyota 4Runner, with 3.0L V6 engine, to improve engine performance and longevity.

It is typically recommended that you change your vehicle's oil every 3,000 miles for extreme running conditions. However, this number can vary depending on your operating conditions, age of your vehicle, number of miles on your engine and your driving habits. Use of synthetic oils can help reduce engine wear and are advisable for older engines or if your typical driving involves extended periods of stop and go traffic.

Very nice DIY write up. Thanks.

I drained me automadic fliud on my 1995 4 runner 3.0 . i then added one big bottle which ibelieave was 4 quarts. is there now way yo much fluid in my tranny?

No, If You Drained Your Tranny Fluid All The Way It Takes Exactly 10.8 Quarts Of Dexron Tranny Fluid. If You Did Drain It All The Way And Only Added Quarts Back In You Are In Trouble My Friend. -Kevin-

it would not go into gear soi figured it had all drained out. Then my father told me what is in the plan is not all of the automadic tramission fluid.

Thank you for showing me the way

Very nice, step-by-step. I actually opened the page to locate the drain plug. I ended up reading it all. I especially appreciate that you tell me what size wrenches. Makes my life SO much easier.

Easy to follow and pictures was a plus! Thank you for the step-by-step instructions, I saved money and the learning experience was actual fun!

I watched this specifically to find out if I had to remove the rock guard or not, I did. LOL. I ended up checking out this entire tutorial although I know how to change oil. I must say that if someone can’t change their oil after reading this, well, they should get a bus pass, lol. Great job man.