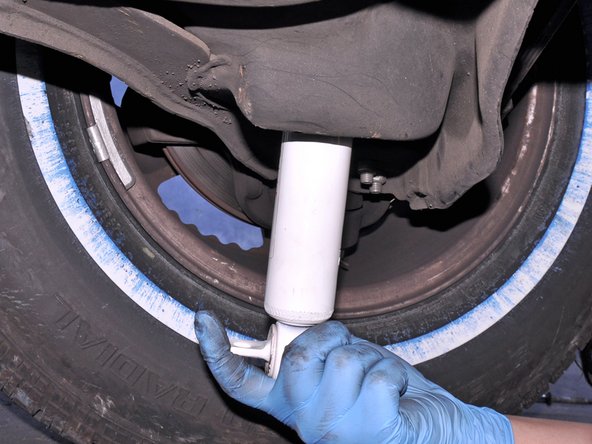 Shocks are dampening units that help your vehicle stop oscillating up and down. Without them, your vehicle would bounce excessively, handle poorly and even your braking distance could be adversely affected. Potential signs of worn or damaged shocks are the suspension feeling excessively stiff or soft, creaking noises coming from the shock area, or fluid on or around the shock body. Use this guide to replace the front shocks in your 2WD V8 '97-'04 Dodge Dakota if you believe your current shocks are failing.

Yeah right. If the %#*@ top shaft of the shock didn't keep on spinning.

If your in Canada or anywhere they use salt on the roads this will happen (spinning shaft syndrome) a cutting torch is your best friend, or a decent nut splitter). If you don't have either of these then using a wrench to hold the 14mm but and I believe a 8mm socket you can spin the shaft “clockwise”. If all else fails use a 14mm deep socket with a long extension and with a side to side motion break the threaded portion of the shaft off the shock. I have used all of these methods many times over as I live in Canada, one of the saltiest nations in the world. I hope this helps someone.

I had to use an angle grinder to cut into the top of the shaft. Eventually it heated up and I was able to remove it. Also try to cut a slit to fit a flat head while you remove the nut. FYI, I did this on a messed up left hand, if can do it, it is possible.

Same as 4fisher; I can’t find a way to hold the shaft. WTH is the answer?