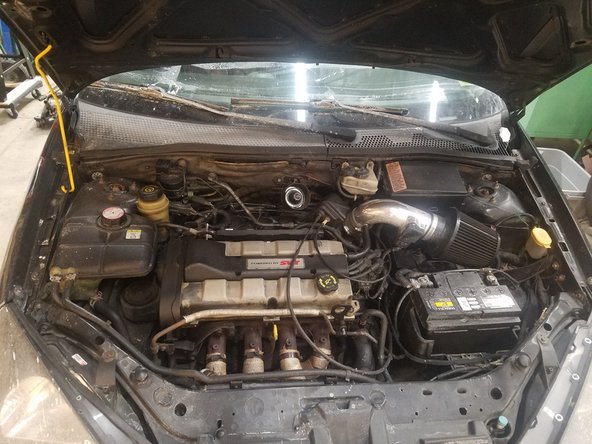 This guide is most accurate for the 2002-2004 Ford Focus SVT Zetec interference motor with VCT, however it can be adapted for use with all 1998-2004 Zetec motors. This must be changed preemptively to avoid engine damage on interference motors, and forums recommend replacement at 90,000 miles. Careful care must be taken to follow proper procedure, failure could result in serious engine damage. This is a very involved repair, and if you are not familiar with car repair seriously consider having this professionally installed. Always wear safety glasses, ensure the battery is disconnected, and the vehicle is properly supported while working. Attached is the PDF guide I followed to complete this repair.

To reassemble your device, follow these instructions in reverse order. Be sure to follow proper torque specifications.

To reassemble your device, follow these instructions in reverse order. Be sure to follow proper torque specifications.

What an absolutely fantastic guide. Excellent pics and instructions. This is the best guide I have ever used! I’ve been a mechanic for over 60 years and this is the best! Great job! Thank You!

I did not expect to see this guide on iFixit. What a detailed and great step-by-step guide for the service all SVT Focus owners dread.

How on earth did you wiggle the timing belt cover off without taking the engine mount AND studs out?

Big thanks for the guide.

Excellent presentation with very good insights and cautions. A couple of thoughts on improvements. 1) The factory workshop manual recommends loosening the water pump bolts prior to removing the serpentine belt, which eliminates the need for the strap wrench as recommended here. 2) When reassembling I waited to install the motor mount until after I had installed the serpentine belt. You get better access to that very tight area without the mount in the way. Otherwise this is a great addition to the factory manual which I had access to for this repair.

Awesome guide for the svt focus. Other than this spark of hope I cannot find any info on my 04 svt focus. I have been told that the Chilton and helms manuals do not cover svt focus.