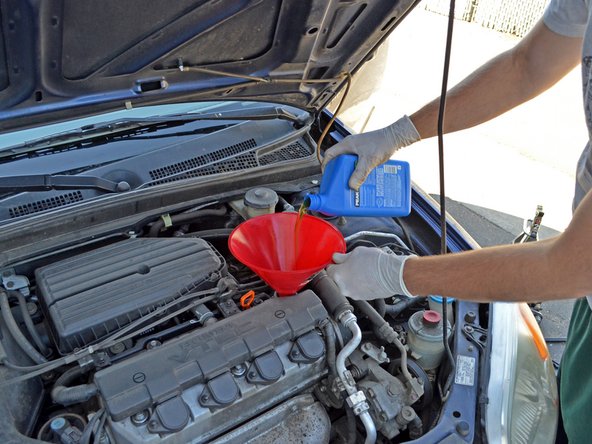 So the oil in your Civic is indistinguishable from dark roast sumatra. This should help.

You may need a breaker bar to remove the drain plug from the oil pan housing. Also, the manual recommends that the drain plug be replaced at each oil change. I have found this wildly unnecessary, but was able to buy a couple spares for less than $3.00 each through a dealership. The reason they recommend this is because the plug itself is made from a softer aluminum alloy. After 150K miles, they're nearly impossible to remove without a breaker bar. A new plug (which is slightly shorter in length) does help, and does not leak.

Good Question it is very use full guide. please A civic hybrid can be done using these instructions, but Honda recommends using a synthetic oil - 0W-20 I believe.

The washer is aluminum (crushed washer), not the drain plug (at least on my Civic 2001) and needs to be changed each time. My car is 180000 miles and the drain plug is as good as new.

This is a nice article. I have noticed that removing the filter can be really messy so I would suggest to put some rags underneath to catch all the oil from the filter. Also I use the jack to raise the car higher in order to speed up the draining process.

A quick tip when draining the oil is, once you have the drain plug removed, also remove the cap on top of the engine. This will help to drain more oil out and do it faster. Also check with your supplier to see if you can buy a magnetic drain plug. This pulls any metal shavings out of the circulating oil and is better for your engine and filter. Will be a few more dollars than a regular plug but worth the peace of mind in my opinion, particularly if your car is older. Happy driving!

I wouldn't recommend crawling under a jacked-up car without jack stands or some type of blocks. It's very dangerous; I know someone who was killed when they skipped this step and their jack failed. I realize that's not likely, but believe me, it happens.

I have an 02 honda civic ex...i have a cracked oil pan. I dont understand which one i would need when im buying to replace it..is it a 3.7Q or 5Q? Plz help

I'm trying to change my own oil money isn't a problem but if all you have is a jack what else will be a good support so ur not crushed pampering your baby?!....

If money is no problem then purchase a pair of jack stands as the guide states.

If in a pinch (oil change on the side of the highway?) remove a wheel and lay it down under the car for a little added protection.

Do you recomend use “lucas oil stabilizer”?

The guys at minekie changed my oil. I gave them 10w 30 … also then the over filled. Way past the second max level line. Its not smoking but i dnt knw what to do? Please

Thank you. You describe it very well all the details.