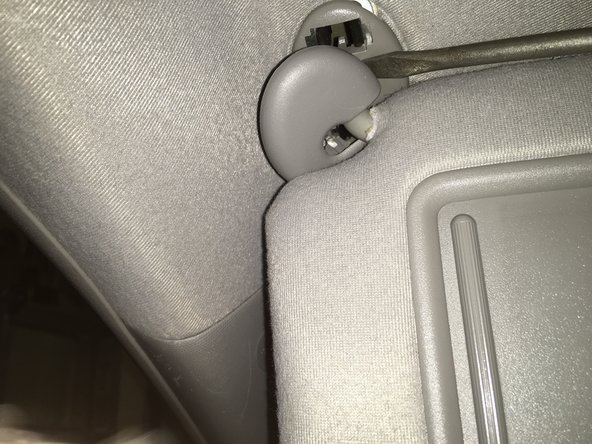 2007-2011 Toyota Camry's were installed with a sun visor that was later recalled due to a defect in the inner plastic body. The two halves of the visor that connect around the lever arm begin to pull away from the arm that attaches it to the interior of the car. Making the arm unable to hold the visor in place effectively, increasing the risk of it obstructing the view of the driver. Over time most visors even fall off the connecting arm completely. This guide provides a simple fix to the defect, providing a way to reinforce the faulty connection that is causing the problem. Follow our guide with the step-by-step process to insure that it will be fixed correctly.

How do you remove the visor from the swing arm to begin?

Is there any electrical work you need deal with? it looks like in the first pick there are some wires hanging from the swing arm that I am guessing power the light

For future readers: simply remove the visor from the ceiling as described in step one. No need to separate the visor from the swing arm in advance. Proceed through the steps as described. I used a 3x5 tie plate (http://www.homedepot.com/p/Simpson-Stron...) and it worked beautifully. I screwed the plate (2nd row of holes) to the edge of a piece of wood about the same thickness as the visor and bend it around that wood as a guide. It resulted in the 1st and 3rd rows of holes aligning so that I could put the screws all the way through and secure with lock nuts. I used #6-32, 1.5" screws (2) and #6-32 locknuts (2). The holes in the tie plate were ever so slightly too small for those screws but a drill bit one size too large for the hole widened it perfectly with ease. The screws were too long (1" was too short) and needed to be cut off with a dremel afterwards. (I couldn't find a 1.25" length screw for the job.)

Well, for most of us the visor has completely fallen off of the swing arm already, so it's a non-issue. But thanks for the condescending reply to the OP who took the time to write an incredibly helpful review.

This is a Toyota design flaw. It is a safety issue and is negligence on their part not to admit failure and issue recalls. This is in no way isolated to the Camry. It occurs in RAV4s, Tacomas, Highlander's, Tundras and possibly more.