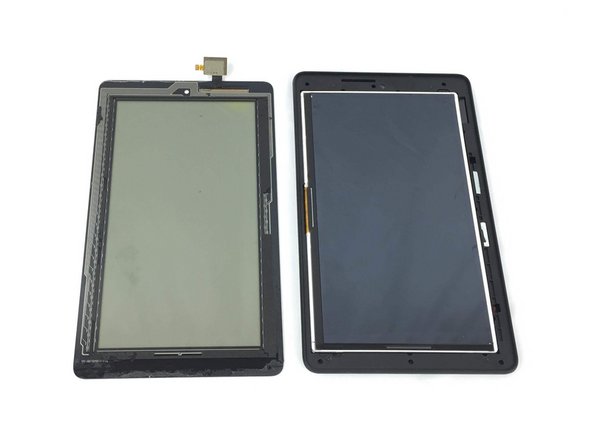 Ordered mine from here: http://www.ebay.com/usr/guan_lcd took about 2.5 weeks, maybe more. Replaced my digitizer following this guide and the other one on this website. Everything went fine until I turned the tablet back on and I ended up with a rainbow haze over the screen. Screen is responsive like new, but I really can't see anything, Hope I didn't get a defective component

The rainbow haze is likely due to leaving the plastic protection from the inside of the replacement screen. It can be difficult to see. I had the same problem but levered up the screen and it was sorted. The screen light is refracted by the plastic coating I assume.

PS: There's foam padding under the original digitizer, the replacement (same serial number) doesn't have the same foam padding, and it does't come with adhesive strips

where can i order the lcd screen

Do you really have to desolder the speaker wires?

hi, just changed my cracked screen, I removed all the sticky adhesive glue from the plastic frame and put the new screen down, but sadly what do I need to help keep it in place? the new screen didnt come with any adhesive :( many thanks

Lacking anything better on hand, I used rubber cement. Wish me luck.

I used double-sided tape, cut to 5mm width. Worked for me

I used double-sided tape to hold down the digitizer. No more shattered screen and works perfectly.

all done to spec, picture looks good but no touch response??

Does any one know where the Digitizer can be ordered from (apart from ebay) are Ifixit not going to stock this part? I know Amazon allways change parts and are a nightmare but someone somewhere must have bought the surplus stock from the factory making them? Thanks

So yeah, I never desoldered that baby speaker :) just sticked him on the motherboard while away :D

For the removal of the digitizer, I had no means to heat whatsoever.... but didn't need it;

I got to grab a corner the hacking-way: I melted a 3mm hole on the plastic to get a tool under the screen :) and that was it (if a little smooth jack-like hole doesnt scare you, it's a real shortcut)

Then to get around more easily I added a bit of heat, but... just rubbing the screen with my fingers for 30secs was enough ! (really hot ! ouch !)

Where can I buy the screen and lcd? I live in the Phil

Do you have to desolder the speaker when replacing a broken screen reply with email blackmask184@gmail.com

No, I didn’t. Just be careful with the speaker and wires.

I’m with mark, changed a cracked screen, but there is no mention of what to do about glueing down the new screen. Otherwise great tutorial.

do you use adhesive to hold down the screen email me at blackmask184@gmail.com

When replacing a screen can you use adhesive strips or uv glue and does it matter which one we do. blackmask184@gmail.com

Really helpful guide. But really how do you keep the screen down without a adhesive. Also I damaged the LCD screen in the process of removing the damaged touch screen. Guess the heat affected the LCD screen. Be careful on that one.

I just can't see how any of you did this without bending the battery?

The steps and tips are great. However without a new battery I can't tell if it's OK.

The battery bent despite great care…

do you sell LCD of these unit cause my screen has broken.thank u

These steps helped tremedelously. I only had a few problems. Number 1 it’s harder then it looks to seperate the old lcd screen from the frame. Use tape on shattered screen to prevent more shards from happening and being broken up. Be careful. Number 2 there’s nothing holding the new screen to the frame. Make sure you have something to make it stick or use glue. I used double sided tape. Number 3 make sure you order the right screen for your kindle.

I just finished replacing my screen & digitizer. It was easier to order the whole thing on Amazon.  Did a tablet repair once before and did severe the cable.  Now I just buy the screen and digitizer already together. These directions were very helpful. Especially since no other website showed how to get the digitizer out.  No need to desolder  the battery.  Just pry it up,  it’s only in the spot with 2 sided tape under it.  Make sure to use plenty of 2sided tape on the frame so the screen will stay down once you set it back in.

I (a mom with absolutely no tech background) just finished replacing a cracked screen *toot*. Thank you so much for the instructions! However, I never was able to remove the motherboard or the battery. They were very firmly glued down. So, if you’re only replacing the screen, the only things you really need to disconnect seem to be the digitizer and the volume buttons (because they get in the way of the digitizer). Getting the glass off was a pain in the a$$, maybe because I was using a hairdryer lol. But I found that putting pieces of paper underneath the glass as I went along made it much easier.

Again, thank you so much for the instructions. I definitely could not have done it without them! My son is elated to have his tablet back.

So, just to be clear, you only removed the volume button and just pried everything up?

My Tablet (Amazon fire 7) woeks well. touch works but LCD is just black. Under the sun light I can see booting logo, clock, battery and some details but there is no light on display?!! I am looking for a display if anyone has ! Please contact me by email: vaziritabar@hotmail.com

Where can I just order the shell? My digitizer is good… but my son cracked his plastic case to smitherines around the edges… leaving shards of plastic and big gaps! I need it in blue….

I went with this digitizer. It worked. The P/N on the box is:X001OF8VT3 The screen comes with new adhesive strips

clean the old adhesive off the frame. There is enough to reattach the LCD also. It’s a little sheet of 3M300LSE double sided tape strips.

Stick them down to the plastic and then remove the brown release tape.

The tools pictured are essential! I bought this kit.

The ribbon cables for the digitizer and LCD both have little pop up retainers that hold the ribbons in. The LCD ribbon is a ##&&% to get in.

Everything the instructions say to do, you you need to do. The only exception is the speaker wire.

There were two protective covers on the back of the digitizer, be sure to get them both. Leave the front one on till way last!

The battery is only attached around it’s perimeter. It can be pried out around the edges.

This procedure is right on! Thanks

Hi, can anyone help or advise I’ve changed the cracked screen put it all back together, When I switched it on I had the rainbow flare ( took apaprt again to take of screen protector on the inside of new screen) Now when it switch it on i’ve got grey stipe lines across the screen , checked all the connections, they look ok . What have I missed anyone know

I have this too minus the rainbow flare. I have the wide gray stripe and the only cause I can find is a very minor scratch on the black covering down the left side of the LCD. It feels like there might be a micro scratch right next to the scratch in the black tape. I wonder could this be the cause.

Edit is not an option so I re-post. After fiddling with the LCD connector, the gray bar is gone but the display remains white with no picture. I can hear the startup sound . This makes me think there’s no damage to the LCD as I’d thought but may be a bad connection. Something else I can’t see without a microscope. Either way, I’ve ordered a replacement LCD and will say if this fixed it making the white screen absolute damage.