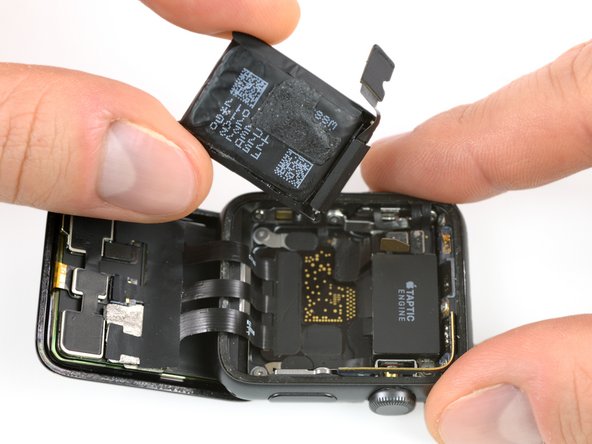 Use this guide to replace a worn-out battery in your Apple Watch Series 2.

Note: If your battery is swollen, take appropriate precautions.

Ordered the kit and replaced the battery, no dice! I believe the components in my watch failed victim to thermal breakdown since the battery got so hot. After the battery replacement my watch acted the same. It got real hot again, so I am not sure what is actually wrong with the watch. I think it is time for a new one.

These directions were easy to follow. The screwdriver in the kit didn’t work at all. luckily I have a good kit with the right tip. If you are confident and able, this procedure should take about 2 hours. Thank you IFIXIT for providing this product an the easy to follow instructions.

Success! Following this guide and the gasket replacement guide saved having to buy a new watch. Like Thomas mentions in his review, the screwdriver was difficult to use. I eventually got it to turn the tiny screw by holding the watch from the bottom rather than just pressing down with the driver from the top.

A question: should I reset my watch after replacing the battery? Or will whatever throttling WatchOS put in place reverse itself?

Yay it worked! Was supposed to wait for my boyfriend to do it but got impatient and gave it a go.. easy peasy even with my baby having a hissy fit inbetween ?

Thanks ! It worked perfectly in 30 minutes !

This guide made the repair quite simple. Opening the watch proved to be quite straightforward once it got started. The biggest challenge was actually getting the Force Touch gasket connector aligned and reinserted, but even that wasn’t tough. I’m not sure why this repair is classified as very difficult, unless it’s to discourage people who find everything to be difficult.

I did find that I had to force restart the watch twice after replacing the battery to take care of some strange problems with sluggishness, but after that was taken care of it fixed so many problems and the watch now runs all day without seemingly random shutdowns. Previously if the battery said less than 50% I knew it would probably shut down with a workout. Now it runs like new.

The hardest part was separating the screen, I had to heat the iOpener tool 2 times and leave it on top of the watch for 10 minutes, wait until the watch was almost too hot to touch and ONLY then did the screen came off.

I agree with Axel, the toughest part was getting the display off. I left the watch on my 3D printer heat bed, set at 80℃, for about 15 minutes. After that the watch was so hot that I had to use a glove on my left hand to hold the watch down. Also, the curved blade is extremely important.

How hot is too hot? At what temperature will the display be damaged?

As long as you can touch it, your display should be fine. You might avoid anything beyond the ~95°C (~200°F) threshold for an extended time (~5min). But that’s just a rough ballpark. As in life, if anything smells funny, you might not want to continue ;)