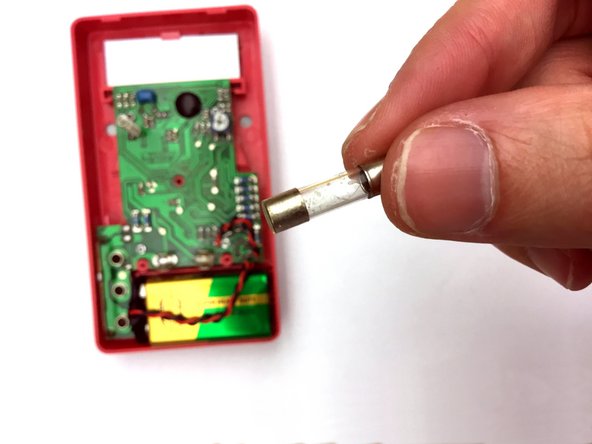 Even the most experienced electrical engineers forget to properly set their meters when making a quick voltage check. Next thing you know, there's a flash and a pop and your fuse is dead. Fuses protect the device from damage and are cheaper to replace than the entire device. These 7 function digital multimeters have multiple modes of operation, with current measuring functionality that set them apart from the cheapest of meters. The current measuring modes, located on the right side of the dial, are the only modes that rely on the protection of the fuse. When the fuse is blown, the device can not pass or measure current, but the other 6 functions continue to work like normal. Giving the meter a new fuse can restore functionality. Fuses can be fragile and should be treated with care when handling them, just as with any electronic device. Avoid grabbing the fuse by the middle glass or white ceramic center body. Skin oil on the glass can degrade the natural lifetime of the fuse and holding fuses by their center using fingers or pliers could crush the fuse body. This guide walks through the fuse replacement process from start to finish, pointing out the various hazards along the way, ensuring a problem free fix.

To put the meter back together, go through steps 4 through 1 in reverse order. Your meter now has a new and working fuse, allowing the rightmost "DCA," or current measuring modes, to be functional once again.

To put the meter back together, go through steps 4 through 1 in reverse order. Your meter now has a new and working fuse, allowing the rightmost "DCA," or current measuring modes, to be functional once again.

The one I have does not have fuse holder. Small, axial leaded fuse is soldered in.

In making this guide, I did find some cheaper red meters like the one above that had the same pre-soldered fuse you described. As far as I know, I have been able to confirm that Home Depot, Lowe’s, Hardware Sale’s and Ace do carry replacement fuses of this type, at least the lucky few stores I have visited around my state. In the case of these types of fuses, one would need to be familiar with the skill called soldering. But having to solder makes this guide more difficult if one is new to soldering. You can find out more about soldering here: How To Solder and Desolder Connections

Sharp eyes and excellent question! I’ll be glad to answer.

Notice how most of the numbers on the front are in units of 2, 20, 200 and such. On most meters numbres such as 1 10 and 100 are used to indicate their range, however; with theses meters being so cheap and disposable, they have an issue with accuracy. If you go above the specified number (ie 30 volts or 300mA) the accuracy can not be maintained. If you were to make your own meter using normal standard components, you’d be lucky to be accurate with ±20% (based on the values of resistors, capacitors, and any critical components). Often, the higher you go (in terms of input voltage or current) the less accuracy you have (components warming up causes value drifting, eg a resistor value increases). So while the internal electronics are rated at more than 500mA, the fuse is added for protection, but above 200mA your measurements could be 20% off.