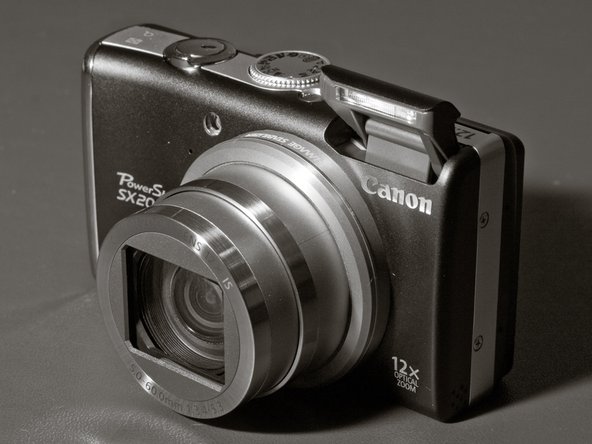 A faulty LCD screen is easy to replace. If you have a stuck lens, complete lens assemblies have been seen on eBay for around £25 and can be fitted quite easily, though it has been reported that some replacement lenses on eBay are factory rejects and not worth the money. If you have unreliable buttons, you may be able to cannibalise the parts from another camera of the same model with a different fault.

Disassembly of the lens is a more advanced operation which may be undertaken if you have a flair for understanding intricate mechanisms and can devote as much time as it takes. This is covered in detail by a companion guide.

The only essential tool is a small cross-head precision screwdriver. It's very important to remember which screws came from where. You can use a couple of 7-day pill boxes, noting which compartments contain the screws from which steps, or stick the screws to a piece of paper with Blu-tack, noting the step number against each.

This camera contains many ribbon cables which need to be disconnected and reconnected. The connectors are of 3 types:

"Left" and "right" in this guide are as viewed from behind the camera.

Nice guide for a beginner to start with No ambiguity

Very nice guide and shots and page design does not get in the way when going back and forth between text/multi-pics !!! Thanks. Unfortunately I can’t find info on my camera ixus 285hs zoom lever ring for which the “Spring” seems to have died.

Awesome guide (this one and the lens disassembly guide), with it I was able to fix the infamous 'Lens Error' .

So what did the fault turn out to be in the end?