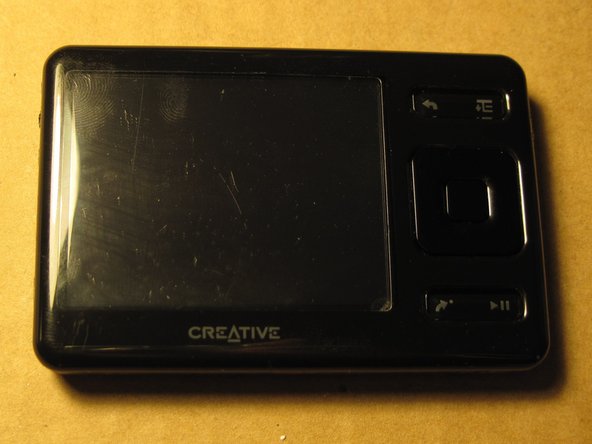 The ZEN's case is held together with 8 snaps. The front half has the snaps, and the rear half is just a plastic shell.

You will need at least two thin flat-head screwdrivers (or spudgers or whatever), a 00 phillips screwdriver (that's very small, in case you don't know your sizes) and a low-heat soldering iron. You'll need medium-level soldering skills for this.

Many thanks. That helped me a lot, just ordered replacement battery :)

What a bodge job - Not a good idea opening the case with screwdrivers which will ALWAYS produce marks !!

Excellent guide, thank you. I just used it to replace the battery in my Zen. May I offer a few pointers:

1) I find that doing the initial prying of the case can be done better with a small pocket knife blade rather than a screwdriver. It makes fewer marks on the case if you're careful to force the blade directly down into the crack (almost a millimeter), then rotate to pry up the case. Of course, care must be taken not to slip and cut yourself ...

2) If you're only changing the battery it is not necessary to go beyond step 7 ... no need to remove the battery tray. Just use a knife to gently pry the battery from its adhesive. Be careful though, the battery is flexible and you don't want to rupture the case or bend it too far.

3) Be sure when reassembling that you position the switch slider in the case, properly over the switch on the mainboard ... otherwise you'll have to open it again like I did. ;{)

Many thanks, this was extremely helpful.

very helpful post, I also used a small blade to open the case and had a completely smooth battery change. .. Many thanks, as the waste bin has missed out on being the new home for my Zen.

Finger nails are a good option to open the case - no damage (to the case - and if your nails are strong and flexible they will not be damaged either!) and non-conductive.

excellent !many thanks, but I think it ie near impossible to find out a new battery. Can you tel me hi tenzion so I can replace with an external one (not an elegant solution)

Successful battery replacement - button wire desoldering not necessary. I used a piece cut from a plastic card (credit card or similar) and a cocktail stick to pry the battery off its sticky strip. Thumbnail into the crack between the casings just where the SD card slot is (this is the most flexible area) and slide towards the corner farthest from that same slot with the thumbnail inclined towards the wider side (away from the screen) - this helps pop the catches. And then on around the case. Once you get to the corner coming up to the side with the usb port the whole thing should come apart “hinging” on the side with the port. Thumbnails don’t mark the case. Mine was also a victim of a dunking accident and I was really surprised that after a day or so drying out, it would work with a power supply from a usb. I tried using a power pack, but the one I have seems to shut down because the Creative doesn’t draw enough power to keep it awake.

On getting a battery if you are in a place where the Brazilian river doesn’t deliver: you could try buying a cheap MP3 player or other device and see if it has a battery with the right dimensions and voltage. The ones on the Ipod shuffle lookalikes are too thick - I tried it.