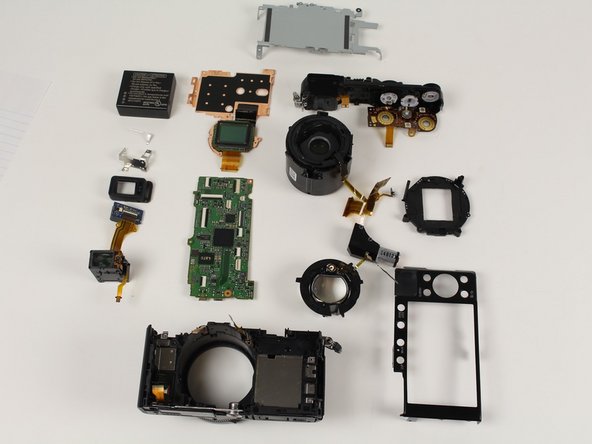 Do you have broken parts inside your camera that you don't see guides for? Do you want to see what makes your camera work? Do you need to recycle your camera and want to do it properly? This guide will show you how to completely disassemble your Panasonic LUMIX DMC-LX100.

Thanks for the effort in compiling this, however even being pretty experienced in precision instrumentation and electronic repair but I encountered some difficulties.

1: To remove the hot shoe cover plate you actually have to lift on the 'forward' end of the plate nearest the lens to un latch and slide it out, not the "back end"

2: The screws are so tightly glued below the hot shoe that they are nearly impossible to remove, I got 3 out but the same front one that appears to be missing in your pictures is stuck fast. The screw that holds the LVF is also glued fast and I believe it's smaller then a 000 phillips.

3: The back metal plate does appear to be glued to the top of the body and no amount of prying seems to loosen it.

It appears Panasonic intended this camera to be disposable and not dissembled. Sad because all of them seem to get dust on the sensor at some point.

I would love to add a microphone jack and cannot see the internal microphone wires. Are they part a ribbon (in which case ia m out of luck) or they are independent from a ribbon and accessible?

Hello, I destroyed a wire, the one for the contraol panel (menu, qmenu, arrows, ...) Everything is working fine, but not key are working.

I need the wire to connect to the motherboard.

Where can I buy this ?

Or buy the right keyboard ?

Check out these links, depending on your camera version: