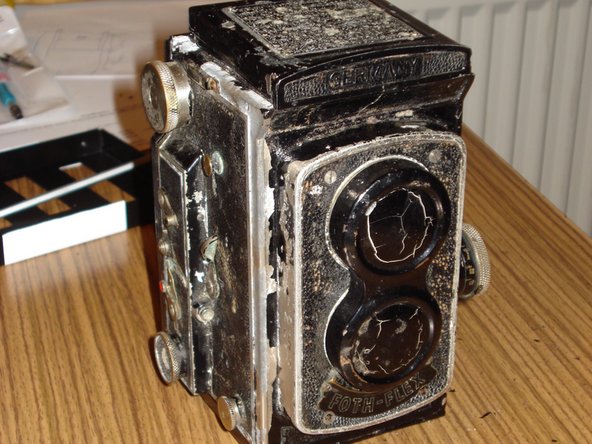 This guide will show the teardown and repair of a Foth Flex twin lens reflex camera for roll film 120 from about 1930-1940. It is a quite rare camera with a somewhat unusual design as it is one of very few TLR cameras with a focal plane shutter. Due to its modular construction it is relatively simple to work on it. However, if you have no experience in camera repair yet, I would advise to start with a Foth Derby (127 film) which sports the same shutter design but is otherwise simpler due to the lack of a focusing lens.

By the way, the version shown here sports the f/2.5 Anastigmat lens (apparently 4 elements in 4 groups) which makes it the medium format TLR with the fastest lens I am aware of, although this is somewhat academical as the transmission of the lens is similar to that of an f/2.8 post-WW2 Rolleiflex due to the lack of coatings before the war. The Foth flex was also available with a simple f/3.5 Anastigmat triplet lens.

Very cool. I have one of these and it needs some work. Any idea where I cn find replacement screws?

Sorry for replying late. You’ll find some M1.4mm, M1.6mm and M1.7mm (and bigger) screws e.g. at micro-tools, probably also at some watchmaker supply or even ebay. Remember that at this tiny size, determining the correct size can be difficult, even with calipers or micrometer screws. Screws always have an outer diameter slightly smaller than the nominal size (and nuts’ inner diameter is even smaller), so it’s easy to mistake e.g. an M1.7 screw for an M1.7 one.

No, it’s the opposite with these cameras: You have to set the shutter speed before cocking the shutter.

Replace $!^& with “set”. I used another word that begins with “c” and I guess I got censured.