Install CloudReady for Chrome Updates (or another OS) 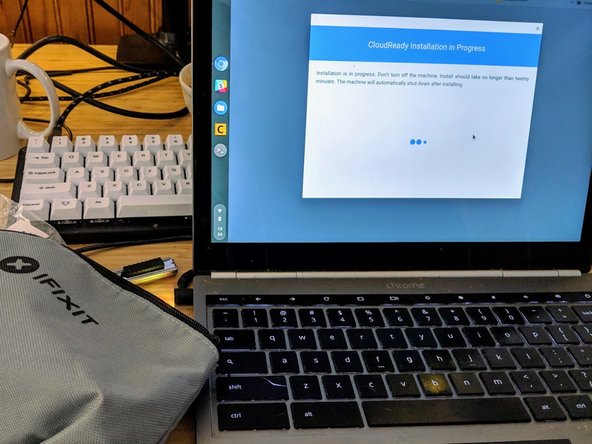 The original Chromebook Pixel, a high-powered Chromebook released in 2013, stopped receiving updates from Google in August 2018. While the laptop still functions (and pretty well), it no longer receives Chrome OS updates, including security fixes. Plus, Google will keep reminding you with a little red notification that it has abandoned it.

This guide will get your Pixel modernized once more, with security updates and OS improvements. Best of all, hardly anything will change about the interface or system. We will install CloudReady Home Edition. CloudReady, from Neverware, is meant to give older laptops and desktops a new life with a lightly modified version of Chromium OS, the open-source root of the Chrome OS companies put on Chromebooks.

The Chromebook Pixel isn’t listed on CloudReady’s list of officially supported devices, but given that it’s a Chromebook, it works entirely fine. I’ve used for four months as of this guide writing, and 98% is functioning: Wi-Fi, Bluetooth, touchpad, touchscreen and display, even the Linux system built into newer Chromebooks. There’s a strange sound occasionally when you boot up, but that’s about it. You won’t get Android apps, but then Google never tried to put them on the Pixel, either.

Important: You will have to remove the Pixel’s write-protect screw and change the laptop’s BIOS as a prerequisite to installing CloudReady with a minimum or problems. Without doing these two things, CloudReady may not install properly; at the least, it will require you to enter a Control+L command every time you boot up your Pixel, or else hear a very loud, un-mute-able beep. The initial hassle is worth it.

Luckily, the Pixel is an easy laptop to open up and get inside. Since you’re already opening it up, consider a battery replacement if your Pixel can barely live off the charger after 6 years.

You’re done! Enjoy your new open-source, up-to-date Chromebook. If you ever want to switch back to the standard BIOS/Chrome OS, you can use the same Mr. Chromebox script detailed in Steps 8 & 9 to restore your stock BIOS, and use a Recovery USB stick to flash a new Pixel system.

You’re done! Enjoy your new open-source, up-to-date Chromebook. If you ever want to switch back to the standard BIOS/Chrome OS, you can use the same Mr. Chromebox script detailed in Steps 8 & 9 to restore your stock BIOS, and use a Recovery USB stick to flash a new Pixel system.

I have followed your tutorial but cannot get the Mr. Chromebox script to run. I am trying to install on Pixel 2013.

Where are you in the process? Are you seeing any error messages? Are you using the terminal that appears when you press Ctrl+Alt+”forward arrow”, or trying to use the Ctrl+Alt+T shell?

Johan! I have now updated the tutorial with details on getting past the “localhost” login thing (entering “chronos” when prompted for a localhost login). My apologies for not noticing this missed step in the original tutorial.

+ You’ve followed the previous instructions, and you’re sure that your chromebook is in a Developer Mode state? i.e. when it boots up, you hit Ctrl+D to get into the setup, not Space to start recovery?

+ Is the terminal seeming to ask you for a password?

Yes, Ctrl-> with Dev mode set. Keeps going to a regular terminal mode login/password prompt. However, slightly punctured the battery in getting the case off so it's better to just replace it with a new Pixelbook due soon.

Hello. I tried install cloudready on my pixelbook 2013 but after install when machine shut down i turn on pixel and see black screen with mapping not found

Perhaps it was a corrupted install. Even one bit wrong could change something. Remake cloudready, follow the installing Chrome Os carefully, and replicate the problem. I cross my fingers pray for it to work.

How do you do this without the script since…it doesn’t work.

I all doing as in tutorial

Igor - see the new details added in Step 8. You can enter “chronos” as your login at the localhost prompt, or you can try running the script from inside ChromeOS after a dev reset (ctrl+alt+t, enter “shell,” and go from there.).

Tried several times to get the prompt in step 9, but i am always getting some other shell where is asked for local host login.

I have updated the guide, because I think I missed a step when it comes to the Ctrl/Alt/-> prompt: you need to enter “chronos” as your login, when asked for a “localhost login.” If it asks you for a password, hit Enter without entering one. That should get you to the shell where you can then run the script. I apologize for this oversight in my original guide.

Hi, hoping you can help me resolve some problems with my Pixel 2013. Followed your guide up to the end of Step 8, but that’s where I’m stuck. When I type “chronos” at the “localhost login:” prompt, I get the following: “chronos@localhost ~ $” At that point, it does nothing if I hit ctrl+alt+t, and if I type “shell” it responds with this: “-bash: shell: command not found”. So I’m stuck at the “chronos@localhost ~ $” prompt. Any suggestions?

Hi Dan! Seeing that you got “chronos@localhost”, that’s good! You just go on to step 9 next, and enter the command at the linked website:

I realize it may not be clear that seeing “chronos@localhost” is a successful result, so I will clarify that in the guide. Thank you!

Thanks, Kevin, very helpful. I’m now at the step 10 sprinting bunny page, but when I press ESC nothing happens and I eventually end up at a white screen that says Continue, Select Language, Boot Manager, Device Manager, Boot Maintenance Manager. I assume that’s not where I’m supposed to be? Any ideas why ESC isn’t sending me to the “select a device” prompt”?

FYI, I clicked on “Boot Manager” at that window and that allowed me to select the usb drive, so am installing Cloudready as I write this. Will let you know of outcome, but I think I’m there! Thanks very much for this tutorial. Really glad to resurrect the Pixel.

Yep! You’re all set. Thank you for the verbose feedback - it’s helped me add more detail and steps to the guide that were sorely needed. It’s far too easy to assume things are obvious when you’ve done them before. Glad it’s running for you!

Thanks again, Kevin. Everything is running smoothly except I have no audio coming through the headphone jack. Any suggestions for how to remedy this? I have selected headphones and messed with volume in the settings, and tried restarting with the headphone jack inserted, but nothing has fixed it. Audio through the computer speakers is great.

Glad that you’re 95% working, Dan! The audio issue is interesting - I might have suffered that myself. I’ll take a look around to see if there are any driver solutions.

Hello Kevin Purdy, I’m about ready tom take the plunge to convert my Pixel 2013 (I have the screw removed) .

Could you fix the link to “CloudReady instuctions “ just so I continue to the correct instructions. Thx

Fixed! Don’t know why that link went bad, but here’s what I was pointing at: https://guide.neverware.com/install-and-...

I removed the screw (Chromebook Pixel 2013) - went through the steps to download new BIOS from the script provided and created a Cloud Ready USB. I received the message that BIOS was downloading then it went back to ChromeOS Firmware Utility Script page and I hit P.

All looked good . However, I when I powered back up I didn’t get the black screen rabbit with my USB plugged in. It powered up normally loading Chrome. Shouldn’t the original OS be wiped at this point? I’ll wait until hearing back before proceeding. Thanks!

Kevin, Thanks for all the info. After I changed networks I was able to load it perfectly. Now running latest version of Chromium on my Chromebook Pixel 2013. Thanks again!

Thank you for this tutorial, it did work for me on my 2013 Chromebook Pixel. I switched from Manjaro Linux to CloudReady … I had previously installed GalliumOS and then pop!_OS before that.. all of these Linux distros suffered performance issues and after a few weeks, constant freezes were the norm.

So far so good!

My wife wanted one too after seeing mine. Sold her HP Chromebook purchased another Chromebook Pixel 2013 on eBay, followed your instructions and viola. Thanks again for your detailed instructions.

Hi Kevin, finally found the time to try again. This time all worked as per your instructions. I am now a happy chap. Thanks

I just wanted to say thank you for this guide, you have breathed new life into my Chromebook Pixel 2013 and that is a beautiful thing.

For those wondering, the guide is still accurate although some of the screenshots are not. However, this is not really an issue as the steps are well explained.

Thanks to your detail guide, I could renewal my Acer C720 to CloudReady and it’s working fine.

Thank you so much!!

Hi I have just purchased a pixel book that is out of date and grateful for your tutorial. Before I void the warranty, I notice that a lot of apps (i.e. hbomax) are triggering pop up boxs that asks for google verification. Will this cause a problem when I have changed the O\S as directed above?

Just went through this guide. It was Perfect.

Went through the guide and install the cloudyready on google pixel 2013, but no sound. How to fix that?

Having to install CloudReady on another Chromebook CB001 since the backlight went out on the other. The updated script isn’t working but the original which says it’s for “Linux” does. But then I can’t backup my BIOS either when prompted. What to do? Thanks

any tips on what do do with black screen? I got through the whole thing; pressed esc on the bunny screen; however the instructions were different to what was shown; chose my usb installer as the boot option which I’m thinking was a mistake.. It booted up into cloudready version 83. but everything was very slow. My guess is that instead of installing cloudready on the chromebook pixel 2013 it instead ran it right off my usb drive. To test my theory, I shut down & pulled the usb & tried booting up again. Now nothing, no bunny, just black screen; tried re-inserting the usb.. still nothing. Surely the new bios is still there right? (e.g. the bunny)

nevermind; found the bunny again. My suspicions were true that I was in fact booting off the USB installer. Missed the cloudready install in the bottom right to “install os”. Found more info reading cloudready’s official install instructions were a bit more up to date / precise. Thanks otherwise though, this was super helpful.

haha.. sorry for spamming the comments.. just another thought that might help others; the commands on the mrchromebox.tech didn’t work for me as presented; e.g. I tried typing them as 3 separate commands; e.g. type one command press enter then type the next. The only way I could get it to work was to put double ampersands with spaces on each side “ && “ between each command. This was alluded to in a previous comment.

Hi, I successfully followed your instructions all the way to the speedy rabbit logo (step 10), but whichever options I choose, just take me to a page with ‘Chrome - your system is repairing itself’. And then it just goes back to the bunny. I am trying to update an Acer C720P Chromebook.

My stupid fault - made the USB without specifying the correct (CloudReady) file. Everything is now working perfectly!

Once again worked perfectly installing CloudReady on a Chromebook 2013.