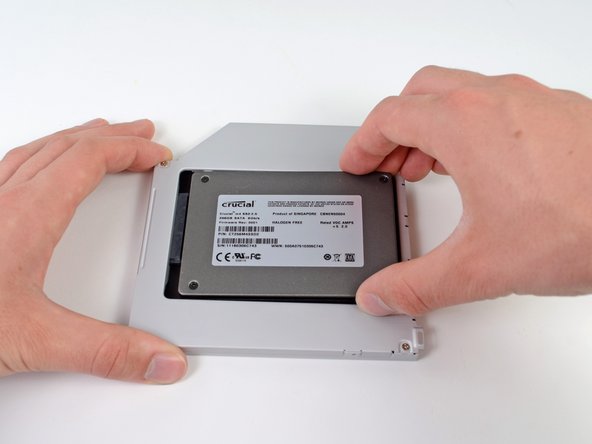 the hdd in my cdbay keeps powering up even though its been ejected, tried a bunch of suggestions, nothing fixes it.

I skipped the steps 6-11 minus just removing two of the screws on the Airport/ Bluetooth assembly and my installation was flawless. I had prior experience removing my Superdrive and there is enough wiggle room for you to pull out the Superdrive drive without damaging any cords or plugs that others seemed to damage. Also, my suggestion is that you clone your hard drive to the SSD and install the SSD in the original hard drive location. I installed the hdd in the Apple Drive Caddy. My computer ran awesome before with a SSD but now I have 500gb for space.

hey mate. which screws you meant by "removing two of the screws on the Airport/ Bluetooth assembly"?

I did replaced my drive by a SSD really quickly ! However, since I've done that, my CPU goes crazy sometimes and the fans as well... I tried to install SSD Fan Control but it doesn't seems to work... Any solution ?

I upgraded my MacBook Pro early 2011 this weekend with a Samsung 850 Pro 512GB. I followed one of the many online guides that talk about Carboncopy to copy your configuration on your HHD to your new drive and then you just have to swap them.

After I did this, I noticed that the fan started to blow for anything that I started. Just opening a webpage was enough. I cleaned the fan and indeed found a bunch of dust collected behind the exhaust of the fan. That must be it, I thought. But after starting my computer, it started the fan again quite soon.

Then I restarted my macbook via the old HDD on usb. Silence as I was used to before.. no fan going nuts on anything I started. So I created a bootable USB stick for a clean install. I have not heard the fan ever since. Only in cases that are normal because it requests more of my MacBook.