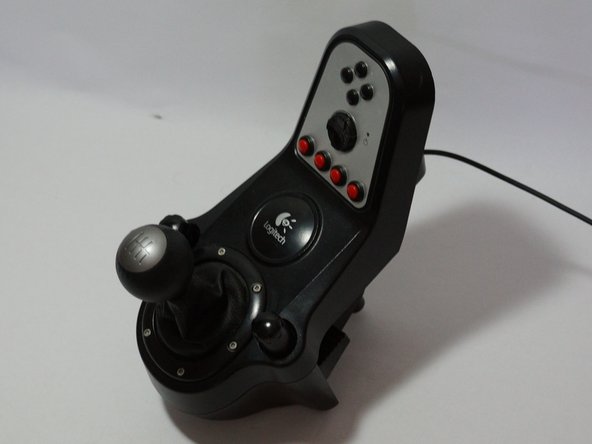 If your Logitech G27's shifter stops responding, you may need to replace the potentiometer inside it. The potentiometer is the electrical component that keeps track of which gear the shifter is on. The replacement isn't too difficult, you mostly just have to unscrew lots of screws.

Where can I buy replacement pots?

Great guide, thanks a lot for the effort. It turned out that one of the cables connecting the pot to the pcb had snapped. Just going to test now.....fingers crossed. :-)

Hey did It work?

I didn't even have to replace them. Only cleaning with electronic cleaning spray and move the pots fully was enough to fix it. However, and I think that was the real problem, one of the pots was damaged because the plastic pointer it has to be inplace in the assembly was broken. Only one half was in place. I used something here we call "type cleaner clay", some sort of clay not use to play but to fix things to the wall or clenaning old typewriters. Comonly blue. Other forums says damaged pots are not common, only dirty or may be, as mine broken. Easy to fix

Has anybody found a source for these pots? I'm guessing they're proprietary? Possibly some version of CTS 252 series? Anything they can be replaced with? I've worked on a couple of these where people opened up the shifter pots trying to clean them and damaged them, and I cannot for the life of me find any replacements and I've searched high and low through every joystick potentiometer source I could find.

if the potentiometer is broken do the other buttons on the shifter still work?

Hey do you know where I can get these piece for spare?

Oh no! I do not know where to draw the spring.

I had the same problem you have. I removed both pots and putted them in a cup of petrolum solvant (i used kerosene) for few minutes then put them back and the problem gone. Try to use cable tie before u bring the mechanisim out of its place so it will be easy for you to do the job.

this worked for my shifter too. i got the newer one as to date, the one thats for the g920. let my lil brothers friend use it, they hit it hard and gear one did respond, but kept going to neutral, when checked in devices and printers, the button was flickering a lot. the process was not exactly the same but most of it is. when in doubt, unscrew everything anyway. I accidentally put the metal ball into where the spring was supposed to be, it got stuck. I got a drill and drilled a whole on the side behind where i got the ball stuck. that did the trick. thanks m8, ma shifter works again

Do I need to buy new potetiometers? Cause I cant find any, or do I just need to remove them and place them in again?

Where can i buy new potentiometer such as the original one’s?