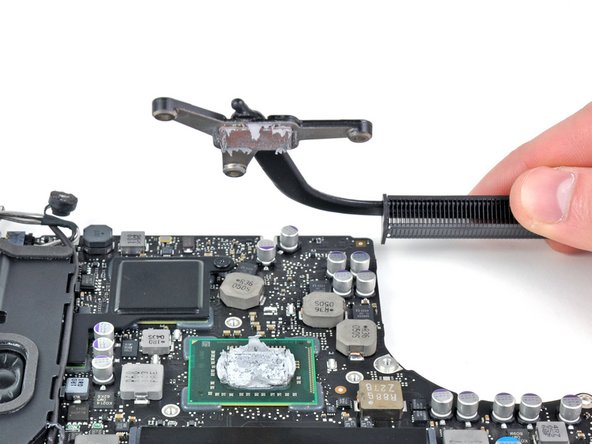 Really nice repair guide! There's no way I would have gotten this right without your help, but after following your guide my computer works like a million bucks. I had gotten so used to the fan running full speed all the time I almost didn't notice it anymore, but with the new heat sink the fan runs a low speed once again and the computer is nice and quiet like it was when it was new. Thank you.

Check the radiator, when I first opened mine up it was filled with dust. The radiator has a pipe coming from the CPU and it is right in front of the fan. It has little lines coming from it. I used a vacuum to clean it.

Thanks for the guide!

I had huge problems with heating up .. I even got a “leg hair burns” :)

I followed this instruction, replaced thermal paste (nothing fancy .. just some “normal” paste from local IT store), cleaned out all the dust (especially from fan)

now its running like new … fan rarely kicks in and when it does it cools it down really quickly. Of course running some intense apps (like lightroom, starting up photos app, many open chrome tabs with youtube etc … ) will do a lot of stress on CPU so it will heat up.

In general some slight “heating up” is always there .. Apple prefers to run their laptops warmer than spinning up fans. But after proper cleaning and replacing thermal paste it is much more manageable.

Small tip: those really small ribbon cables can be a pain in the a** to put back in, so i got them close to the connector, put a little sticky tape on them and used that sticky tape to pull on the cable and push it in the slot.

Like show in the last picture (21) on the left upper side there is a square shaped black plastic cover. Should we put the thermal paste there also ? Or we should not touch it? Thanks!

There’s some kind of a very thin “heat sink” connecting the GPU and another IC chip (under the left speaker) that is not conducting heat anywhere. This seems to be totally unnecessary, because it has been removed from the mid 2012 Macbook Pro ﻿(see picture) with a similar board setup. Well, I removed the black piece of metal following the Left Speaker Replacement guide and cleaned the two chips from the goo-like thermal paste. That solved GPU heating issues when playing videos or gaming, and now the left side of the Mac doesn’t seem to be building up heat like it used to. Highly recommended.