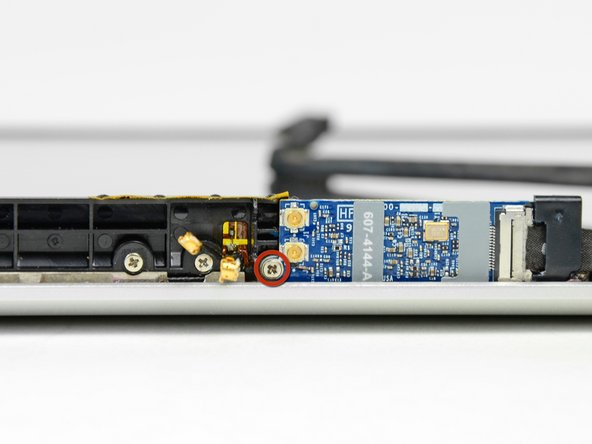 Use this guide to replace a dead AirPort card to regain Wi-Fi connectivity.

I am sick of the occaisonal misinformation iFixit provides. The longer cable that connects on the right side of the screen is so very obviously not just the camera cable. It is also the cable for the Airport and Bluetooth cards... This misinformation led me to spend 100€ on two LCD cables which I now have no use for.

I don't wish to just complain though of course. Can someone please correct this? On the other pages for this MBP the cable is listed in the same way.

The official Apple name for this cable is "camera cable", so that is what we call it. You'll have to take it up with Apple to change the name, as we try to stay consistent with how they name parts.

I think iFixit does an amazing job of being accurate, given that the guides are written based on physical tear-downs. As a small-time mac technician, I am eternally grateful for the unlimited use of free, comprehensive guides. Instead of complaining about free advice, you can easily submit an edit to the guide if it is truly in error. The bottom line with Apple products - they are impeccably engineered, although have some annoyingly tedious steps because of the compact nature. They are build to last, but BE GENTLE!!

The connector from the cable into the airport card is socketed in different ways on the pictures in step 21, i have noticed that the connector fits in either way, but what way is the right one? im asking because after i followed this guide my airportcard doesnt work anymore:(