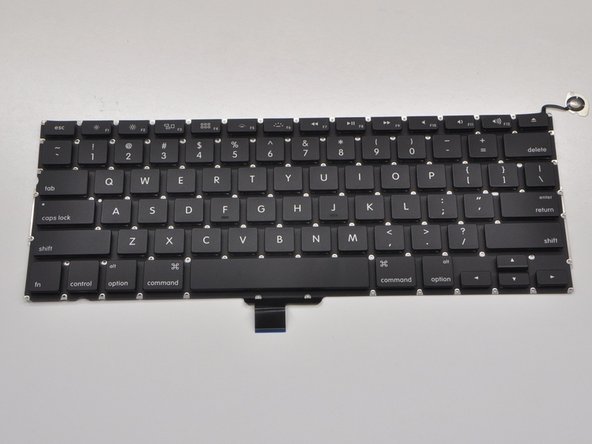 Use this guide to replace just your keyboard, not the complete top case.

Replacing the keyboard requires the removal of nearly every component in your MacBook Pro. Follow steps 1 - 36 of the MacBook Pro 13" Unibody Mid 2012 Upper Case Replacement guide.

Having just done this - successfully, I might add - I need to make this guide a little more clear:

Step 1: open the case. See every other tear down for the screw count.

Step 1A: remove the battery connection.

Step 2/3: remove the fan as instructed.

Step 3A: remove the optical drive. See the relevant tear down guide for specifics.

The remaining steps are pretty OK. Buy a new backlight and diffuser panel along with your new KB.

This guide is not very good at all... terrible actually. It misses so many steps!

I successfully completed this yesterday. Having never done Mac repairs myself the difficulty level made me nervous, however don't be afraid to give it a go! There are lots of little screws and parts but its not hard, more fiddly.

In addition to the tools here consider getting some kind of segmented box or little containers to keep all the screws separate. Also when I opened it up my logic board was filthy with dust! Keep a microfiber cloth and perhaps a soft brush around the clean a little as you go.

Where do you purchase the 13" Macbook / Macbook Pro (2009-2012) Keyboard? I can see the uppercase is for sale, but the guide is for just replacing the keyboard.

Keyboards can be purchased from powerbookmedic, thebookyard, ebay and aliexpress.