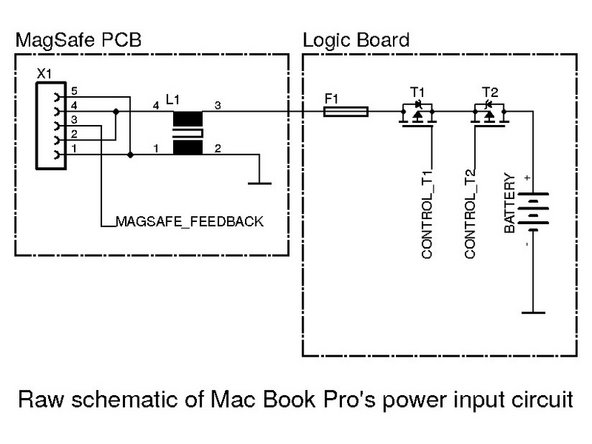 If you use a power adapter which is to weak for your Mac Book (e.g. 60W for a MBP 15" which is specified for a 80W power adapter) the following should happen from a theoretical point of view: The power adapter is overloaded and heats up until the internal thermal protection switches it off savely. -- And this happened in real live: The adapter blew up in a way, that it delivered one last powerful current pulse which also destroyed parts of the logic board. The Mac Book is still fully operational with battery, but can not be charged nor powered any more, even with a new power adapter.

The disassembling steps are referenced to MacBook Pro 15" Unibody Mid 2010 Logic Board Replacement. For this particular guide it is not necessary to unmount the fans, heatpipes and speaker-microphone-block. Just skip the related steps.

Since the topology of the circuit between power connector and battery is common technique, this guide might fit to other logic boards too.

To reassemble your device, follow the prerequisited guide in reverse order.

To reassemble your device, follow the prerequisited guide in reverse order.

Is there any chance you would be able to show the location of these parts if the same thing happened on a 2012 MacBook Pro Retina? I've been trying to find the information for a couple days now. Thank you

Admirable ! and the pics can be enlarged a lot ! thank you!