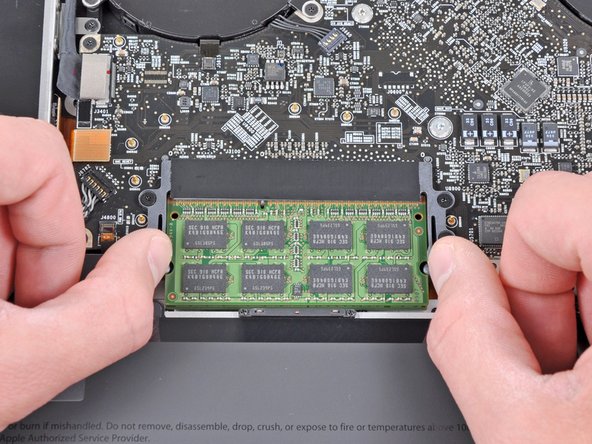 Use this guide to replace your MacBook Pro's RAM.

Thank you iFixIt. Your tutorial gave me confidence to move forward and get inside my computer. I agree with bhodges2, a great opportunity to clean. I'd keep a can of compressed air handy next time. I would also use a separate compartment for each screw. I treated the case like a wheel, lightly tightening each first. Still, the 3mm screws do not seem not entirely interchangeable. Mixing them around, not forcing anything, eventually worked out.

These instructions worked perfectly, thank you!

Folded masking tape to make two sided.Made rectangle like shape of Mac.Put the screws on the tape in order, so I would not mix screws or loose them.That process took longer than installation. Done in 10 mins..No need to remove battery.Put finger on metal stated by Apple.Now going to add 16gigs more in my IMac.Thanks for the illustrations Andrew !!!!