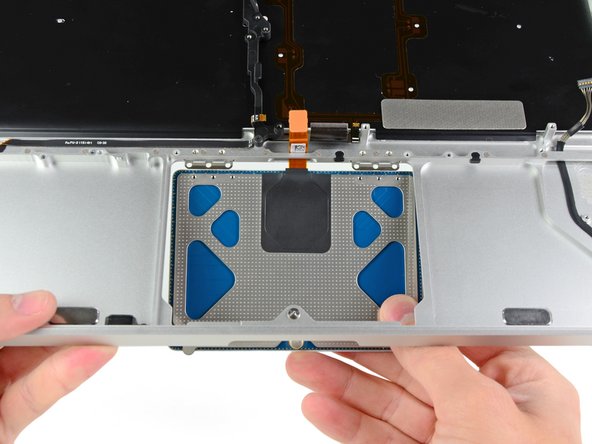 On steps 50 and 53, be VERY careful to stop tightening the small, weak Y0 screws when you meet even just a little resistance. I made the mistake of tightening them too hard, and broke the tops off of two of them! Luckily I was able to remove one of the screws, but now one of them is stuck in one of the trackpad holes, unable to be removed.

i did upgrade to backlit keyboard by adding the backlight to my keyboard. All works well thanks to this guide. Just try to keep all the screws in theyr place coz you can mistake them very easy and screwing the wrong screw in the wrong holle you may endup damaging the body(i hope it make sense). Good Luck

Actually I was looking for a way to remove only the keyboard to clean it, but since there is no guide I followed this one for most of the steps. No need to remove the display assembly and trackpad. But beware that after you remove the logic board and optical drive, you have to remove 3 layers (black, transparent and white) of foil covering the back of the keyboard and then there are like 50 absurdly tiny screws holding the keyboard to the frame. Also there are 2 screws in the upper left corner holding the power button which is connected to the keyboard through a small ribbon cable. After that you can lift the keyboard out easily.

Tips: Label Screws by guide step number and size as you go. That way you can easily backtrack and any divergences between your machine's screws and the guide's will be a non-issue.

Also, be careful when removing and tightening screws. I stripped one of my screws and almost needed to call in the pros.

Use common sense throughout your fix. Nothing should be forced. Take breaks and return with a clear head.