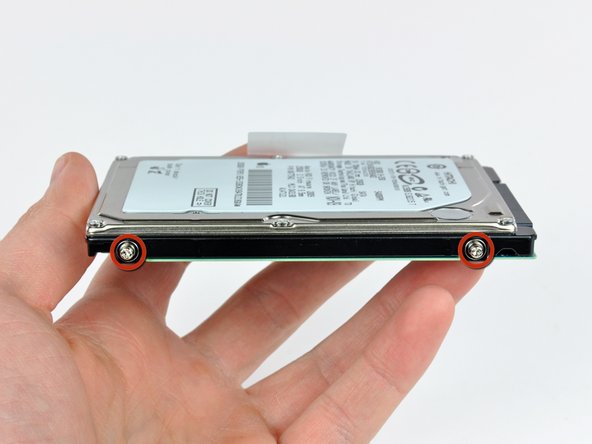 I replaced the original 250GB Hitachi hard drive with a 1TB Samsung HN-M101MBB. Everything worked fine, but now the fan is always running. Maybe the temeprature sensor of the hard drive doesn't connect with the computer?

Excellent guide. I'm a complete n00b when it comes to HD/SSD install so this guide was magic. With the right tools, its just so easy. After also replacing RAM, I'm looking forward to a much more pleasant and productive time with my new old 2010 Macbook :) Thanks, iFixit!

Thank you! I was able to easily change the hard drive of my daughter's Macbook. Didn't need the spudger at any point though, which is good as only had makeshift options available for that.

(Wasn't able to update the OS on same drive as it didn't show as an option in OS installation even after trying Erase/Partition steps using the Utility, as mentioned at several places online. But did finally manage to clone from Time Machine backup and then update the OS onto that.)

Hey I need to know what hard drive I could use for my 2011 MacBook Pro. Also is there other options ? Thanks !!

No Torx screwdriver? No problem! You can easily remove and replace the Torx screws with some good pliers or vice grips.

I had to use a pair of crimpers to get a good grip on one of my torx screws that was stripped. I'm gonna be investing in a small pair of those adjustable pliers(with the crew thing on one of the handles) for my tinker toolbox.

No problem with replacing the drive, but when I rebooted, some keys on the right hand side of the keyboard, including L and the Return key, had stopped working. What could it be?

Thanks a lot for this guide, you saved my sister's mac :)

The only hiccups i came across was that the Phillips #00 screwdriver didn't really want to fit the 11mm screws in step 4. So i striped one of the screws a little bit. Maybe it requires a different size. Also i wish that there was a link to show the process in reverse but it's easy enough to figure out. Overall the process was painless, the instructions are short and simple and the pictures are an amazing aid. I took it at an easy pace with music playing in the background on my iPhone. So I have just finished installing a Samsung 500gb Solid State Drive (pre loaded with El Capitan) into my little MacBook. She booted right up and now with an upgraded hard drive, a little extra Ram, and a updated OSX, i have just extended the life of my little old Macbook. It's now the perfect travel/school laptop with out having to risk loosing, damaging or getting my new MacBookPro stolen.

This was a pretty easy fix. The longest part was waiting for the Time Machine restore to complete. I was worried for a bit tho because I didn't have the original install disks, I bought my MacBook used off of Amazon for pretty cheap. Now that I have a new 1Tb SSD, I'm thinking of boosting my RAM up to 8Gb even though I just installed 4Gb a few months ago from the 1Gb that it came with. I'm so glad that my friend told me about this site!

Hi, I switched to a 480 GB OCZ TR150 SSD from the list of spare parts but my MacBook does not recognize the SSD. Back to the original HDD everything works fine. What can I do to get the SSD working?

After i made it, My macbook just starts and after 2 seconds turns off. What can i do?