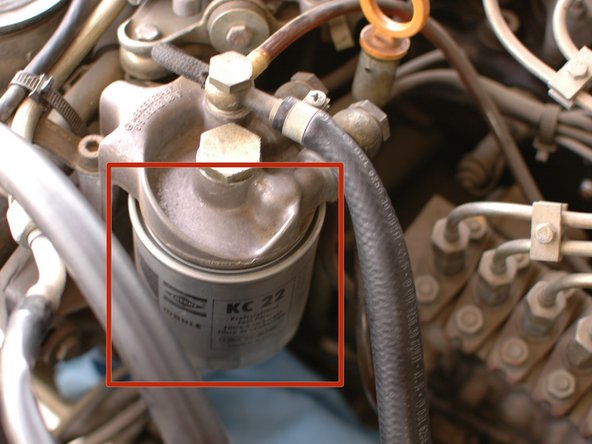 The secondary, larger, spin-on fuel filter on the W123 diesel engines does the heavy lifting when it comes to filtering. It keeps small particles in the fuel from damaging the injection pump and the injector nozzles.

It does a good job of this, but over time it can be come clogged. Eventually, fuel flow will be limited to the point where it affects power output. Change it before that happens. Consider changing it at least every other year, depending on how much you drive. And definitely replace it after you perform a diesel purge.

After finishing, run the engine to ensure it was properly primed. If it doesn't start after 30 seconds of cranking, stop and prime some more.

After finishing, run the engine to ensure it was properly primed. If it doesn't start after 30 seconds of cranking, stop and prime some more.

Using Two people One can operate the starter while the other operates the hand pump until the engine begins to run---then close off the hand pump and starter switch. gary

This is a very clean and concise manual. Nice Work!

To gvonneida and the general public

You could do that but it would be unnecessary as this a gravity fed injection pump, and there isn't any low pressure/lift fuel pump. So there is nothing gained from the 2nd person/engine cranking. Just use the hand pump to prime the high pressure injection pump, the engine will start no problem.

Dirk, just to correct something, there is a low pressure lift pump on these engines. That is what the primer pump is sitting on top of. However, you are correct that generally it is unnecessary to crank the engine to help with starting after you replace the fuel filters especially if you pre-fill the secondary large filter. Just use the pump until you hear the bypass opening (the squirting/wooshing type sound) and you know your fuel system is full of fuel.

Do you mean that you can install the secondary filter dry and pump the primer to fill it up?

Hiya! I’m about to change both the primary and secondary fuel filter on my 300D and was curious if it would be a problem to use the priming pump to fill up the secondary filter. Thanks for this guide!