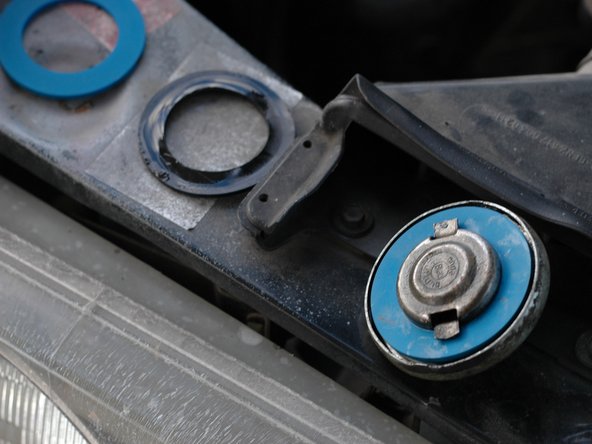 The last thing you want is to be leaking any fluids from your car. Not only is it messy, some fluids can cause damage if left on your paint, rubber car parts, etc.

Some fluid leaks are very difficult to fix and so we live with them until time and money allows us to fix them; however, others are very easy to fix. Start by fixing the easy ones to at least lessen the amount of fluid your car leaves behind.

One often overlooked spot for fuel and oil leaks are the seals on the respective caps.

Note - there are two styles of oil cap that you may find on your car. One is the older metal style that was originally equipped on these cars. The second is a newer style black plastic cap. Mercedes no longer makes replacement metal caps so if your car is equipped with a metal cap it's even more important to learn to replace the seal so you can keep your original cap! The trick here is that no one sells a specific seal for the old style metal oil cap. However, the great news is that the seal that is sold for the metal fuel cap will fit just fine on the oil cap. So if you have a metal oil cap, simply order two of the fuel cap seals instead of ordering the plastic style oil cap seal.

Once the seals are replaced simply re-install the caps. After driving, check for any leaks and try to re-seat the seals if there are any.

Once the seals are replaced simply re-install the caps. After driving, check for any leaks and try to re-seat the seals if there are any.

I replaced my fuel filler cap sal with the blue nitrile? seal and it does seal. But!!! when t was time to refuel (approx 2 wks) the cap was extremely hard to break loose. Much too hard for my wife to open. So I applied some silicone grease. That helped but only one cycle worth. Seems diesel fuel dissolves the grease. So I'm back to replacing the $18 blue gasket with a regular gasket.